September 2019 – Nine critically endangered black rhino were relocated from South Africa to Singita Grumeti on 10 September 2019. This groundbreaking relocation was conducted by the non-profit Grumeti Fund, in partnership with the Tanzanian Wildlife Management Authority (TAWA) and is the largest movement of rhino into Tanzania, increasing the national population by almost 10%. The nine rhinos join two eastern black rhinos previously relocated to Singita Grumeti in an ambitious effort to save the species from extinction. 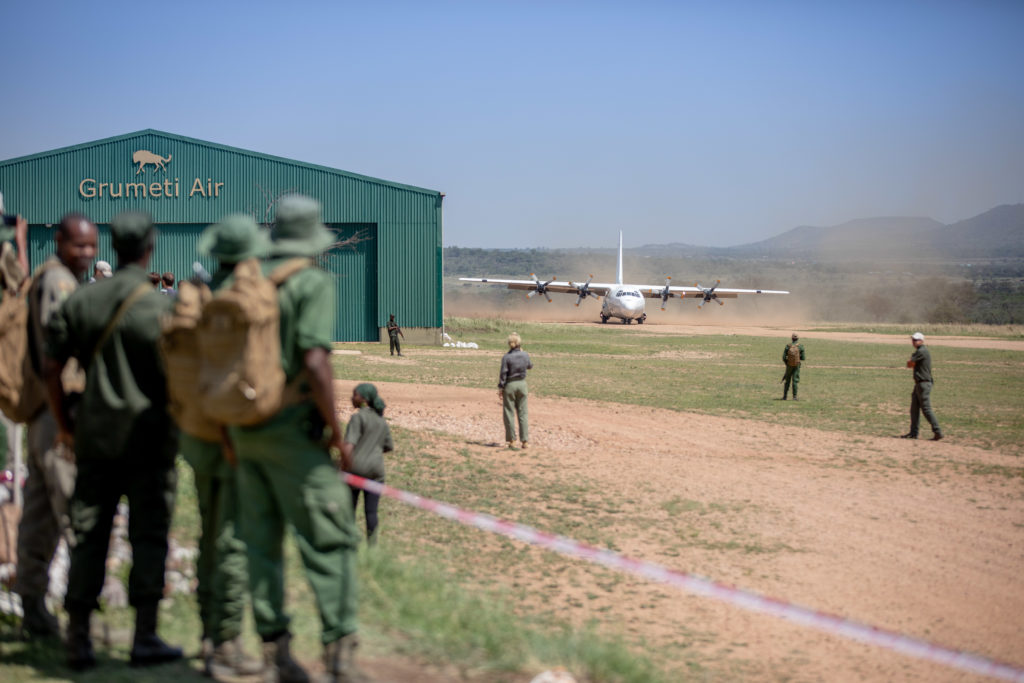 Singita’s partnership with the Grumeti Fund, supports its 100-year purpose to preserve and protect biodiversity and African landscapes for future generations. The nine animals, who were carefully selected by age and genetic composition, will be of extreme value to the gene pool of the existing Serengeti rhino population. Fuelled by a lucrative illegal trade in wildlife products, East Africa experienced a poaching crisis over forty years ago, decimating rhino numbers by 99%. From approximately 10,000 animals in 1970, it is estimated that only 100 eastern black rhino roam Tanzania today. The relocation and protection of this population is therefore critical to the future survival of the species. Singita’s high-volume, low-impact tourism model, pioneered 26 years ago, helps achieve goals such as wildlife reintroductions in the Serengeti. Attracting like-minded guests and donors who believe in Singita’s long-term conservation vision, along with sustainable ecotourism, is critical to protecting Africa’s most vulnerable species and landscapes.

Accompanied by four wildlife veterinarians and a rhino behaviour specialist, the rhino were transported from South Africa to Kilimanjaro Airport on a chartered 747 cargo plane, followed by a light aircraft flight to the Grumeti concession, and are safely housed in a secure location. Once acclimatised to their new surroundings, all the rhinos are expected to be released into the greater Serengeti ecosystem. In September 2018, the Grumeti Fund successfully relocated Eric, an eastern black rhino male from the San Diego Zoo Safari Park, in the US, to the western Serengeti and he should be released into the wild towards the end of 2019. The far-reaching work that Singita supports through their independent not-for-profit conservation funds and trusts has helped animal populations across five regions in Africa rebound and grow dramatically, turning its game reserves into the ultimate conservation success story. Guests can support the future success of these critically endangered black rhino at Singita Grumeti via Empowers Africa: https://empowersafrica.org/partners/singita/ or Grumeti Fund https://bit.ly/2keo86a

Singita is a conservation brand that has been preserving African wilderness for the past 26 years, offering guests an exceptional safari experience with 15 luxury, award-winning lodges and camps across six regions in four countries. In partnership with non-profit Funds & Trusts who implement strategic conservation projects in each region, Singita’s 100-year purpose is to protect and preserve large areas of African wilderness for future generations. www.singita.com

The Grumeti Fund’s mission is to contribute to the conservation of the Serengeti ecosystem, its natural landscape and its wildlife. To do this, we partner with local communities and other stakeholders to build capacity and thereby assist them to realise their development aspirations. We believe that by doing this we can help to create a world in which people and wildlife live together, sustainably, forever.