World Lion Day: Get to Know the Lions of Lebombo

Spanning 33,000 acres, Singita's private concession on the eastern edge of the Kruger National Park in South Africa is known for its dramatic landscape as well as a high concentration of iconic African wildlife. Abundant prey and a favourable habitat draw many big cats to the area, not least of all being eight imposing prides of lion and the interlopers who battle them for territory. Often referred to as "Lebombo: Land of Lions", after the Lebombo mountain ridge that dissects the concession, it is one of the best places in the world to see these beautiful creatures surrounded by nature.

The fragile conservation status of the lion, whose numbers in the wild have halved over the past 25 years, makes the preservation of this ecosystem of primary concern for Singita and its partners in the Lionscape Coalition. Worldwide awareness events like today's World Lion Day also serve to cast a spotlight on the need for sustainable solutions to the challenges facing the survival of lions in the wild, and to help to spread the word about the importance and urgency of their protection. 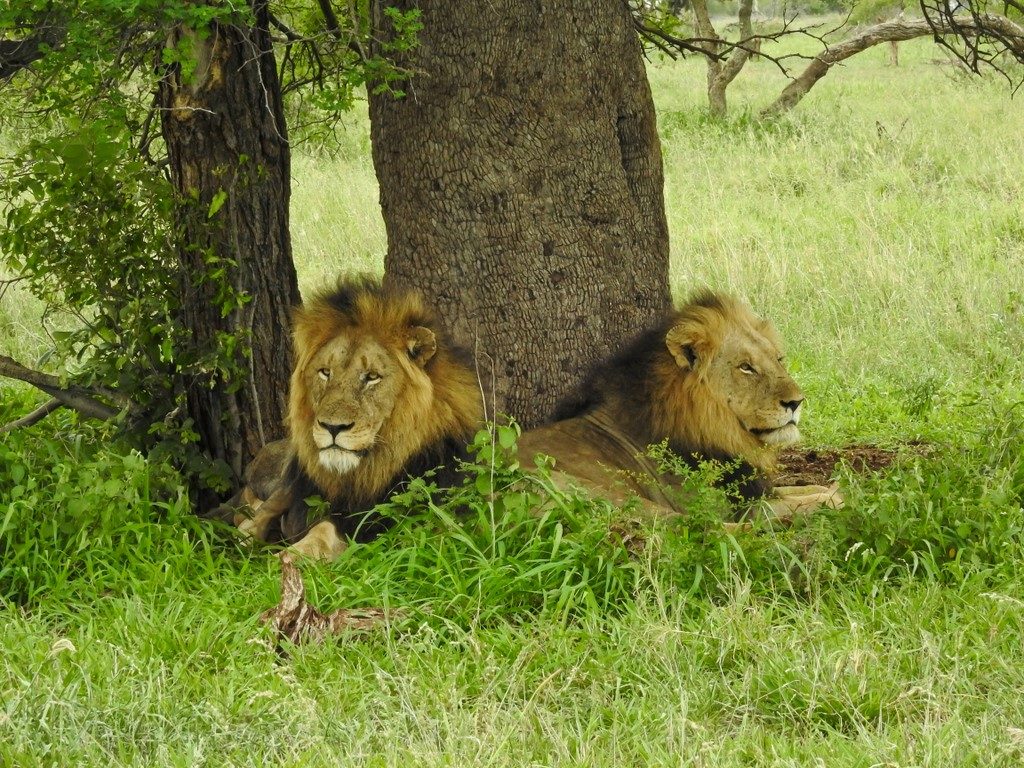 Together with Africa’s other leading ecotourism operators – &Beyond, Conservation Travel Foundation by Ultimate Safaris, Wilderness Safaris and Dazzle Africa – Singita is working with the Lion Recovery Fund (LRF) to harness the power of the tourism industry to further the ends of lion conservation. To date, the LRF has supported 56 lion conservation projects in 17 countries across 33 different organizations, pledging over $5,5 million to the cause. This innovative collaboration highlights the important reciprocal relationship between good business and conservation, while drawing much-needed attention to the plight of a species whose future hangs in the balance. Without initiatives like these, the remarkable lion encounters which are had by guests in pristine wilderness areas like Singita Kruger National Park will tragically become a thing of the past.

As a member of the Lionscape Coalition, one of Singita's aims is to generate additional funding in support of the LRF’s goals, with 100% of all donations received going directly to projects on the ground. Find out more about how you can help » 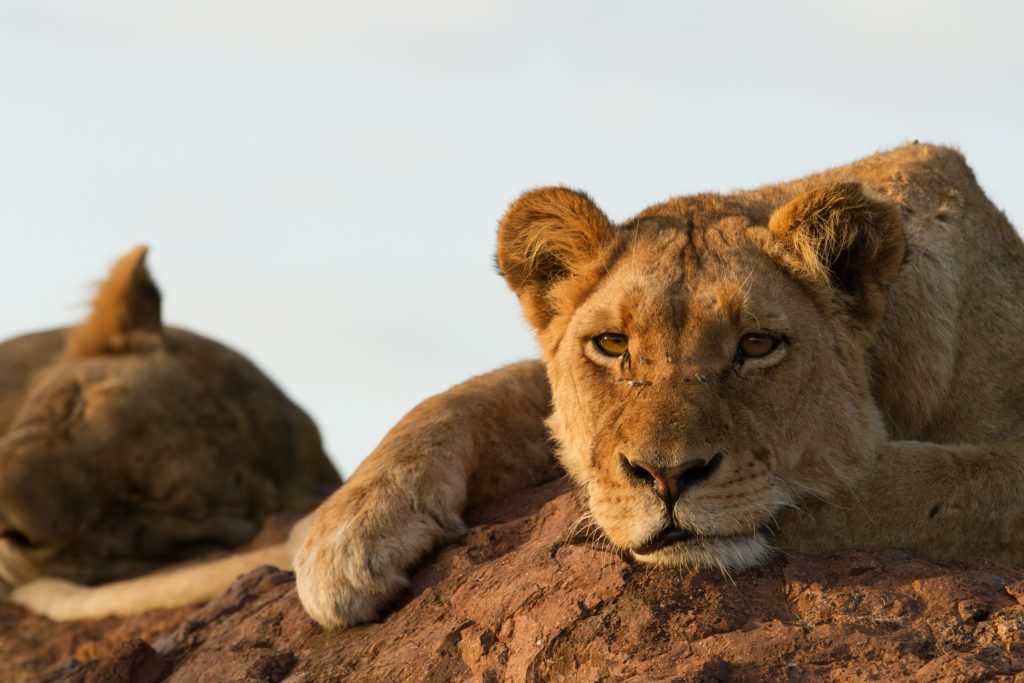 GET TO KNOW THE LIONS OF LEBOMBO Xhirombe Pride The lion now known as the Xhirombe Male was born close to Singita Lebombo Lodge in April 2013. In his formative years, he was most regularly seen in the company of his mother and surviving female sibling in the southeastern part of the concession near the border with Mozambique. This small pride of three (an off-shoot of the Mountain Pride, according to some of the longest-serving trackers in the area) specialised in scavenging along the fence-line between South Africa and Mozambique and also developed a unique hunting technique by chasing game into the fence. While it is presumed that the Xhirombe Male’s mother has passed away (she was very old and has not been seen since March 2019) and his sister has gone further afield, he is still seen patrolling his territory and feasting on his kills. His habit of avoiding other prides and therefore any confrontations with other territorial males means that he has very few battle scars and is one of the most handsome lions in the area. Xhirombe means “Rock Fig” in the local language of Shangaan. 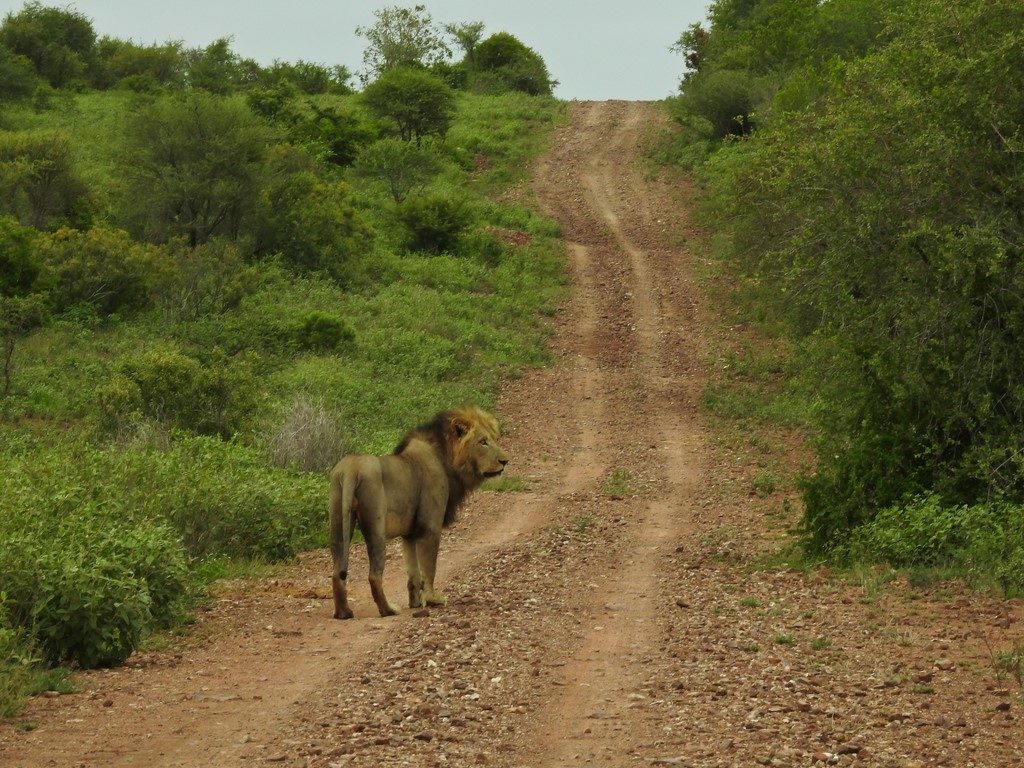 Kumana Males Comprising three adult male lions – one with a golden mane, two with black manes – this coalition was previously known as the Hilda’s Rock or Skukuza Males. They were raised by the Hilda’s Rock lionesses about 70km southwest of the concession before establishing a territory around Kumana Dam, where they were first seen in July 2018. They have been known to trail the Shishangaan pride, even mating with two of the lionesses earlier this year, but generally they stay in the southern part of the Singita concession, rarely venturing north of the N’wanetsi River.

Shishangaan Males The Shishangaan Males are presently a coalition of three adult male lions. Aged roughly between 10 and 14 years old, the main part of their territory stretches northwards from the N’wanetsi River, and westwards beyond the border of Singita’s concession. The oldest of the males, referred to as Xihamham, or the “Grumpy Male”, has been known to associate with the Mananga Pride and the Mountain Pride, even stealing their kills when a leg injury prevented him from hunting successfully. All three males have been seen mating with Shishangaan or Mountain Pride females, as well as taking down rival males who venture into their territory. 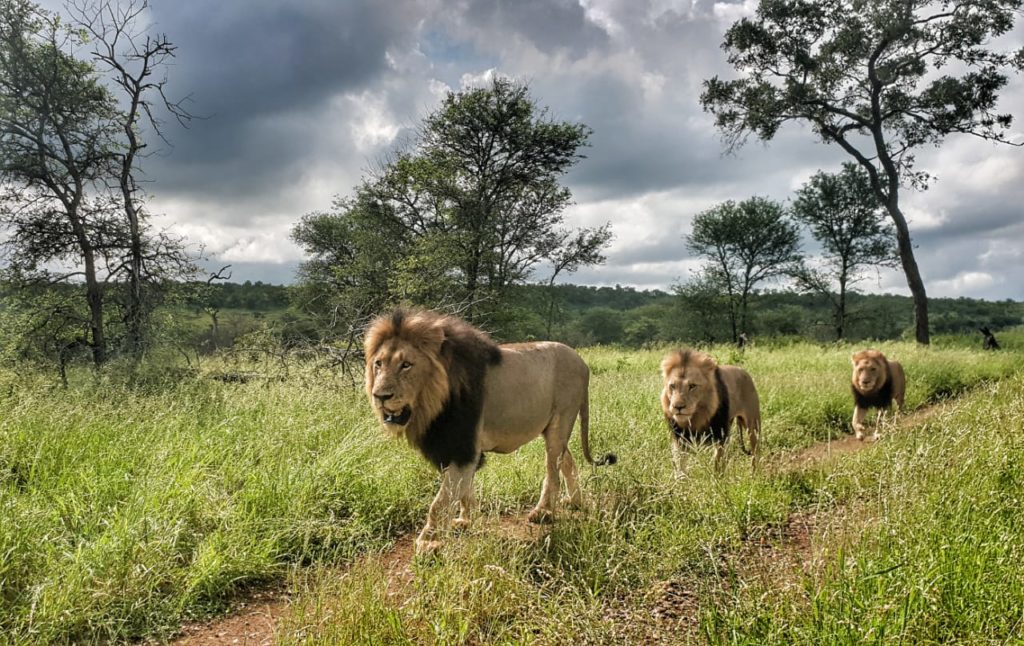 Shishangaan Pride Perhaps most well-known for its most famous member – the “White Lion of Satara” – much of this pride’s territory lies within the Singita concession. They were once a mega-pride, numbering more than 30 individuals, but the group became so large that they were having difficulty feeding all the members. The pride subsequently split into two distinct groups, known as the Smaller and Larger Portion of the Shish Pride. The distinctive white lion, who was born into the pride in July 2014 near the area of the concession known as the Sticky Thorn thickets, is usually seen with the Larger Portion. A white female was also born to this pride, although she died at an early age. 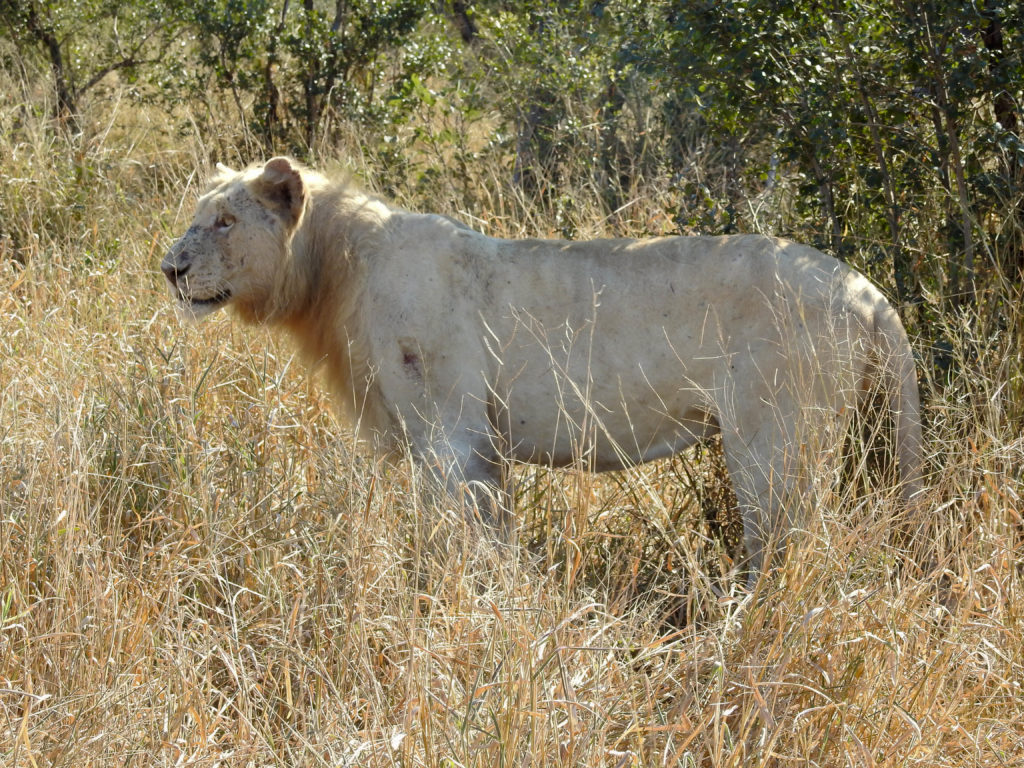 The White Lion of Satara by Field Guide Brian Rode

Until last year, the Shishangaan was the dominant pride in the area with a significant territory and regular litters of cubs being born. In recent years, some of the sub-adults have splintered off while other members of the pride have been killed or badly injured by rival males. Sightings of the pride from the last few months have included seven lionesses who have been roaming outside the concession since last year and three sub-adult males (including the white lion) on a buffalo kill. 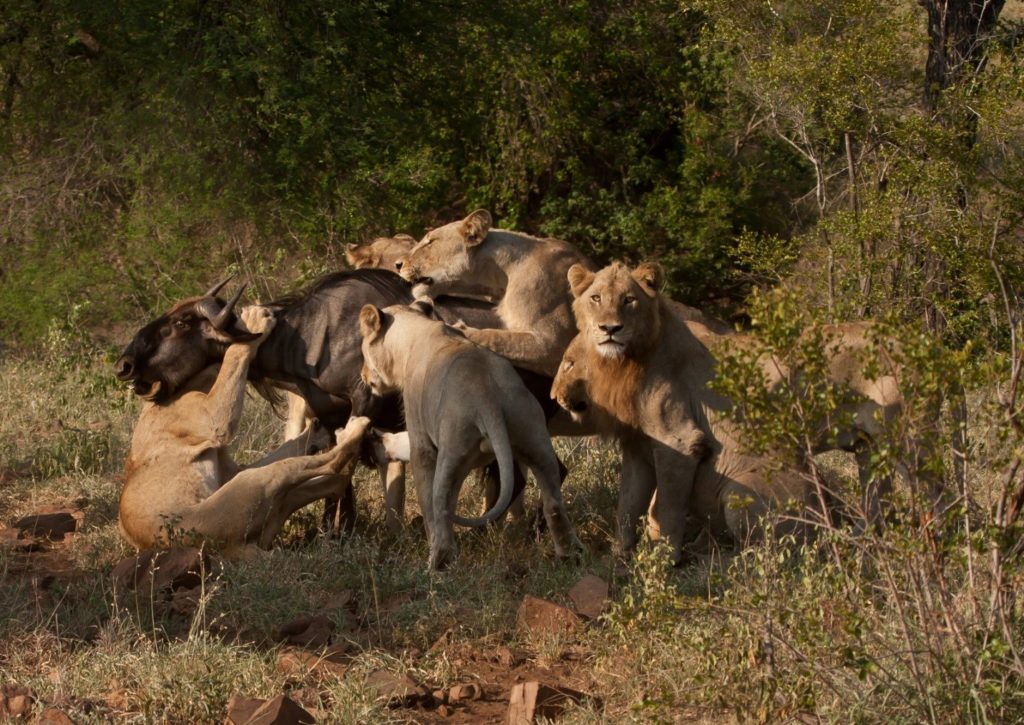 Mananga Pride These eight females are mainly seen in the central and western areas of the concession and spend a lot of time beyond its western boundary. They have been spotted fairly regularly throughout this year, most notably in the company of the three dominant Shish Males near a body of water known as Gudzani Dam or with Xihamham; the Grumpy Shishangaan Male. 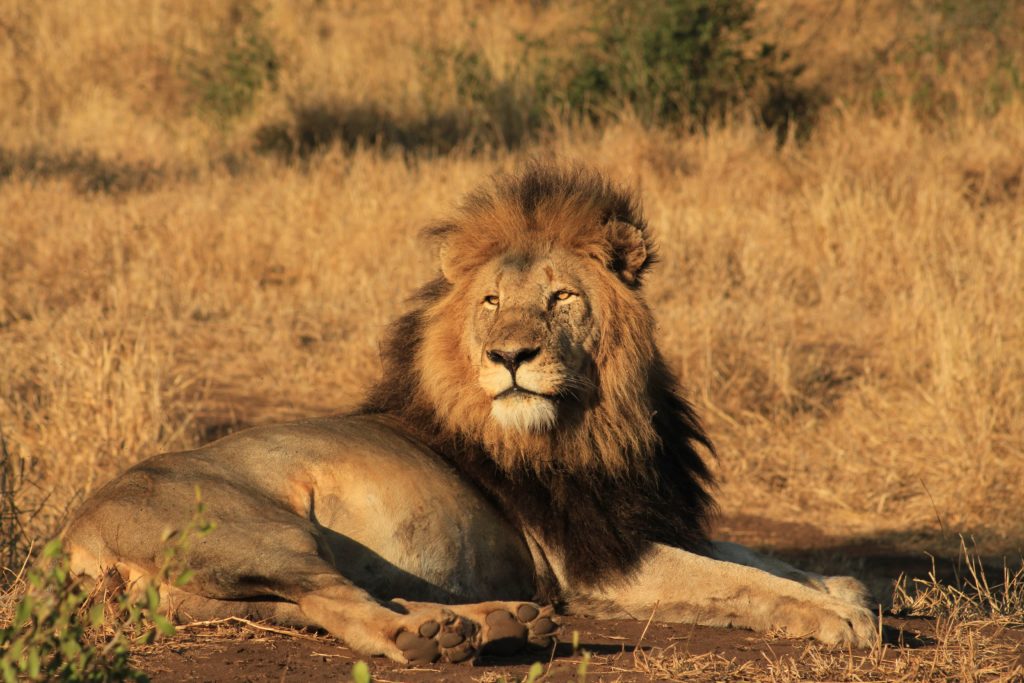 Mountain Pride Consistent sightings of the Mountain Pride on the Singita concession have been recorded for more than 15 years. Also once a mega-pride of the Kruger region, their numbers peaked at 37 some years ago. They are often accompanied by at least one, if not two, of the beautiful Shish male lions. The pride currently consists of three adult females, one sub-adult female and three cubs, who were born in January 2018. These lions are usually seen in the central area of the concession and are often also accompanied by Xihamham. 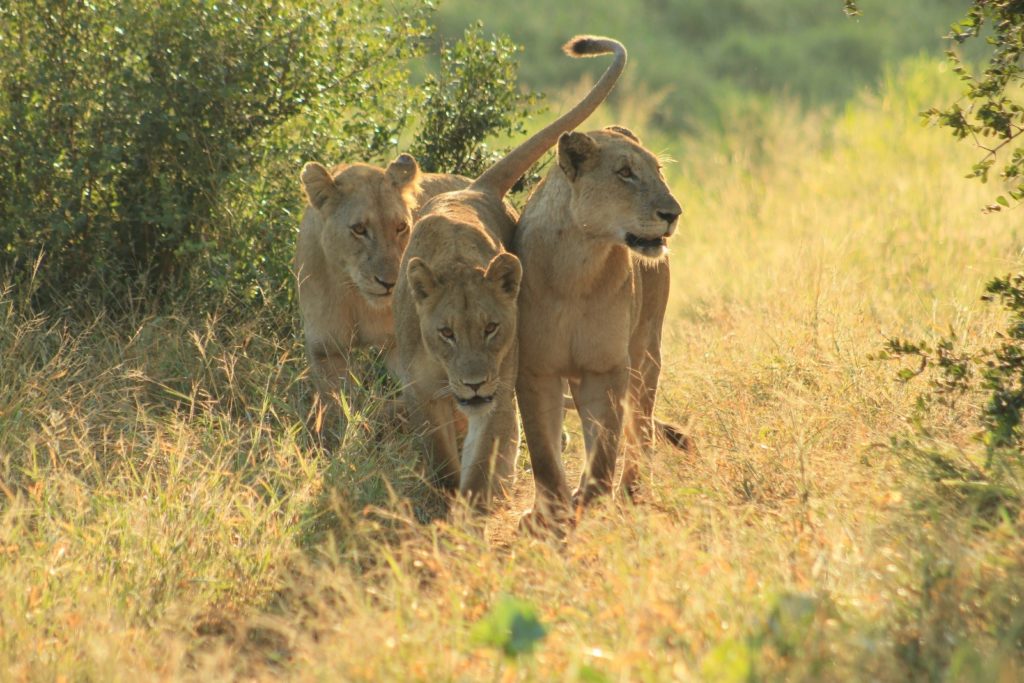 Northern Pride A relative newcomer to the Singita concession, crossing into the area from the north for the first time in February 2016, the Northern Pride most recently numbered ten individuals. One of the lionesses is easily recognisable for her very scarred face, with big gashes around her mouth. As recently as January this year, five sub-adult males and a young female were seen chasing wildebeest in areas of open grassland and, on another occasion, seven sub-adult males and three young females were seen feeding on giraffe. All ten members of the pride were spotted recently near an area of the concession called Quelea Nest. 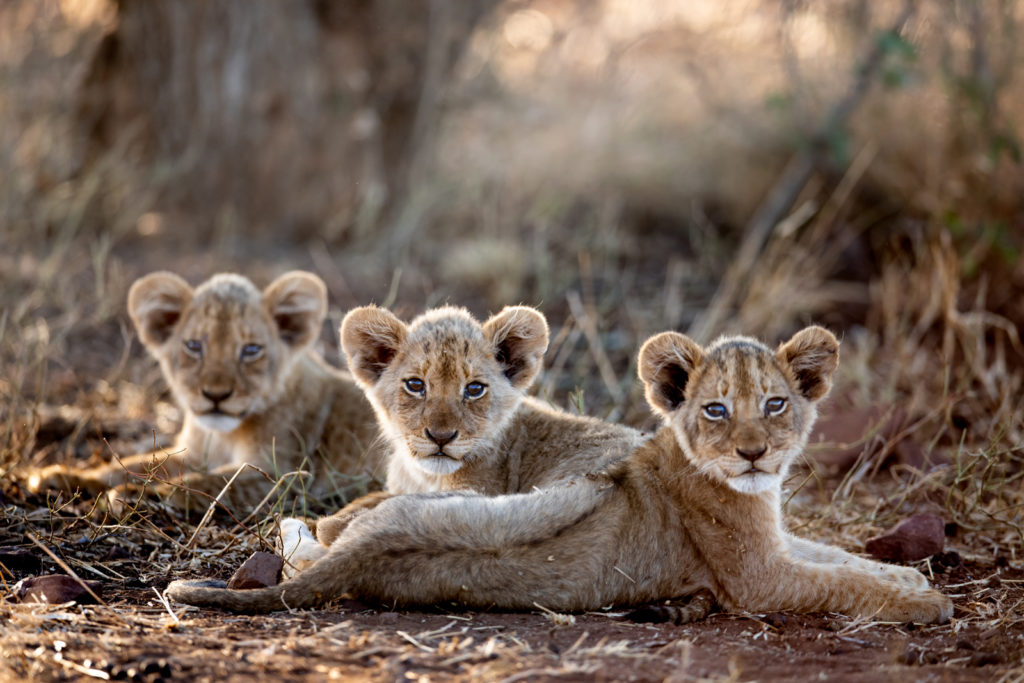 Other prides and unknown lions A number of prides and coalitions whose territories skirt the edges of Singita’s concession are seen near the boundary from time to time. These include the three large Northern Males, the Southern Pride and the Collared Pride; a group of six very shy lions, one of which wears a telemetry collar. Singita’s Field Guides and trackers also regularly record sightings of unknown lions – usually males – crossing into the concession in search of new territory. 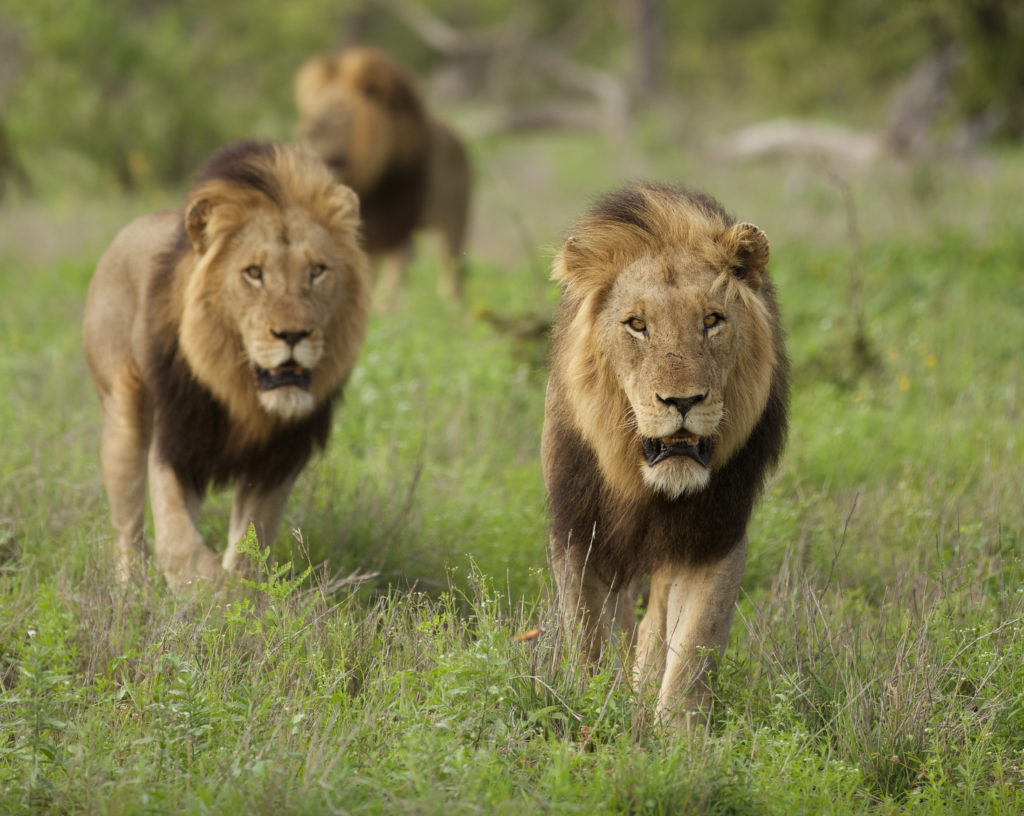 DISCOVER SINGITA KRUGER NATIONAL PARK Singita's private concession in the Kruger National Park gives guests exclusive access to one of South Africa's most spectacular landscapes and the wildlife which flourish in this carefully-protected habitat. The area is home to two breathtaking lodges - Singita Lebombo and Singita Sweni - each set on peaceful riverbanks, enfolding guests in complete luxury while bringing them in close contact with their unspoiled surroundings.