Traversing 130,000 acres of sandstone hills, Mopane forest and majestic baobab trees on the border of the Gonarezhou National Park in Zimbabwe, is Malilangwe Wildlife Reserve, a spectacularly diverse and beautiful piece of Africa that Singita Pamushana is privileged to help preserve. Our biodiversity protection work, rhino reintroduction projects and other conservation initiatives in the reserve mean that the native fauna and flora are flourishing.

On this evening we had two white rhinos drinking and wallowing on the right, several bull elephants drinking and wading on the left, and hippos cruising along in the middle just as half the sun hid behind the rocks, and the other half ignited the distant landscape.

The monthly wildlife reports from the region, written by field guide Jenny Hishin, give added insight into the healthy animal populations that our guests enjoy glimpses of on twice-daily game drives. Here's a snapshot of last month's wildlife sightings: 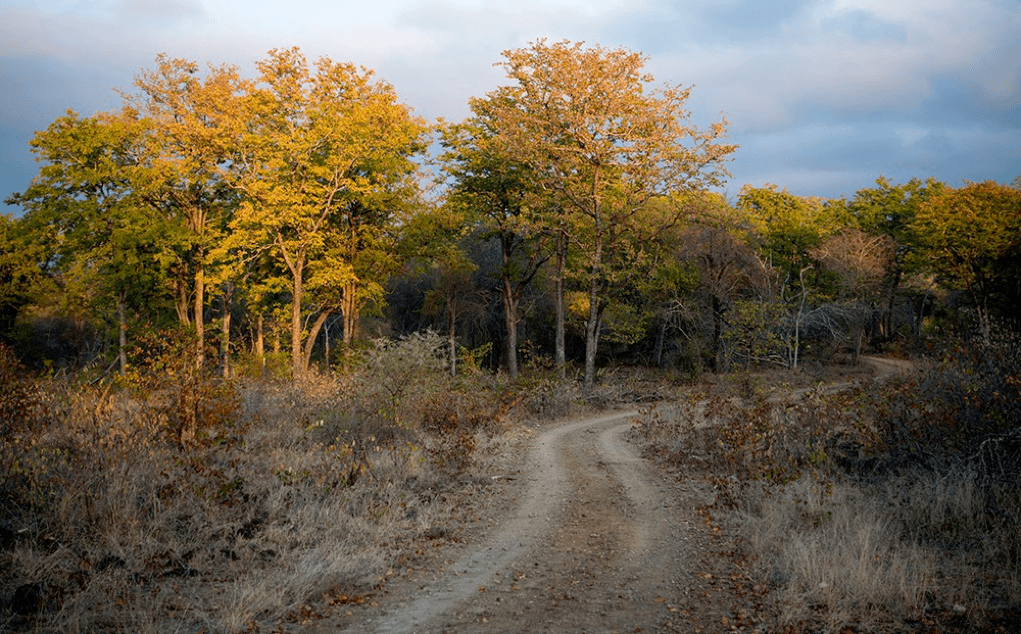 Thanks to late rains we also had a late autumn, but August saw an end to that and these warm metallic colours have been replaced with the stark blue-grey browns of winter.

Wild dogs 14 wild dog puppies. Yes, you read that correctly – the pups are running with the pack now and there are 14 patchwork bundles of them! Together with the 12 adults they are a sight to behold, especially when you find them lying in the middle of our main track, romping around and playing with each other. The pack's hunting activity is at an all time high with 14 more mouths to feed, and guests witnessed them out on a hunt at the river where they brought down an impala and devoured it before their eyes. 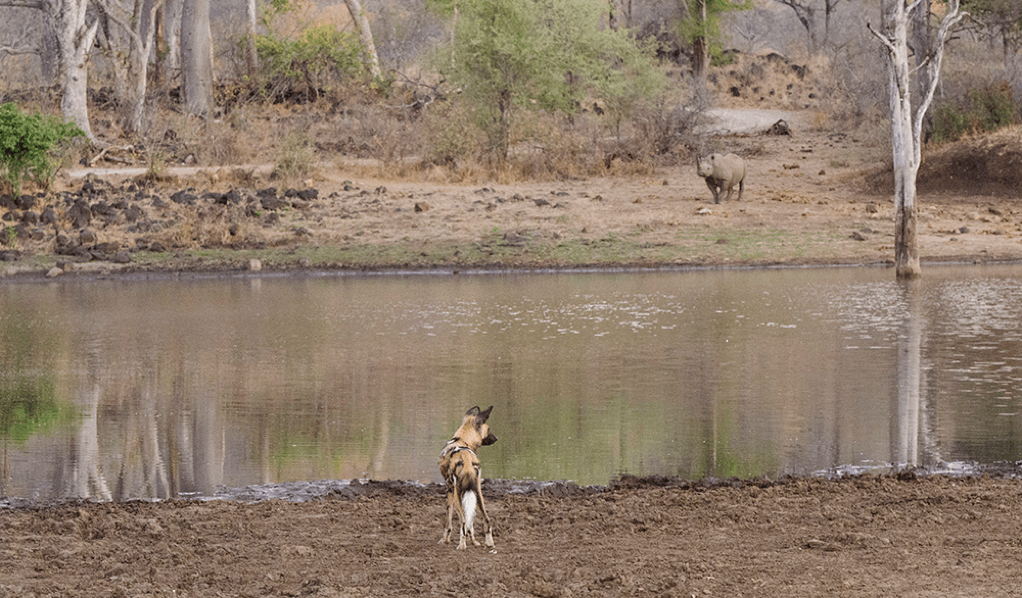 Two of the most endangered species in the world in one shot: black rhino and wild dog

Elephants There have been sightings of elephant bulls on every drive, and time has been spent with a couple of breeding herds too. On one occasion we were surrounded by a breeding herd and enjoyed lots of interest from the curious animals and watched in delight as the little calves nursed from their mothers. 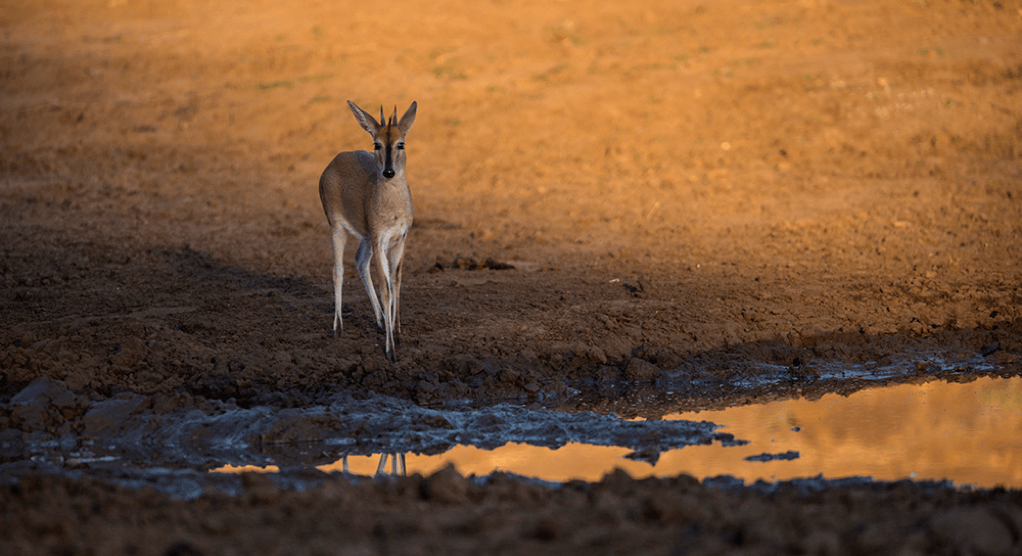 A common duiker appeared and drank from an inlet, just as the sun was rising. We see duikers often enough – but I have never got a good photograph of one as they always dash away with a distinctive diving, zig-zag motion.

Leopards Guests enjoyed a leopard sighting shortly after they’d viewed the ancient rock art on foot, in the Chidhumo area. Brad's tracker Robert thought he spotted a leopard, and turned to him saying he thought it was a leopard but it’s just a bush. Brad said he’d double check using his binos and, to everyone’s surprise, there was a huge tom cat lying in the shade in all his golden glory, watching the world go by. He was a good 250 metres off but they sat and watched him for about 25 minutes, and had time to call Japhet in with the rest of the guest party so that everyone got to see it. 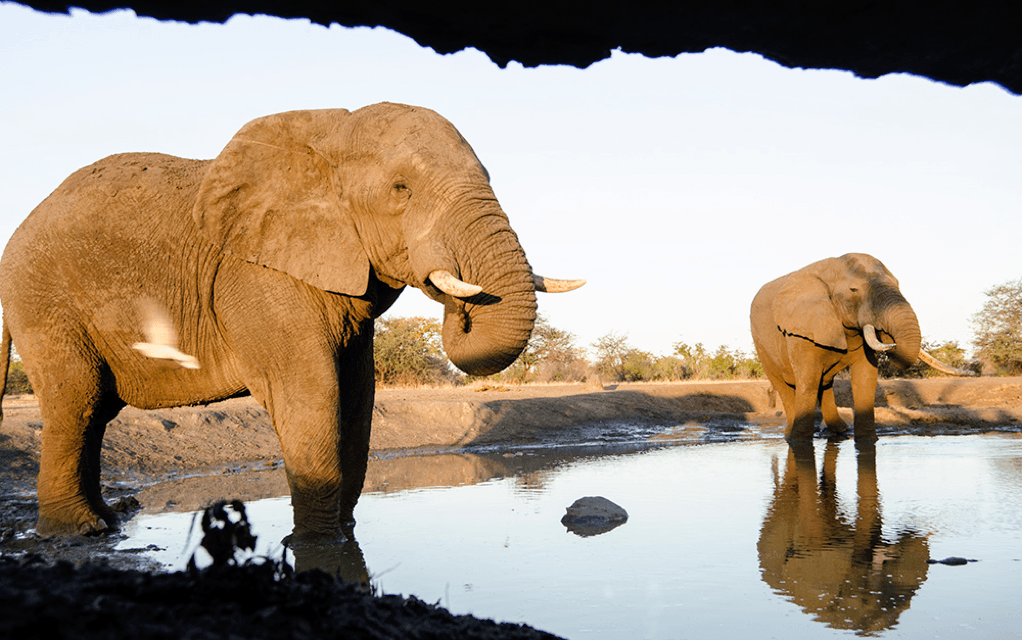 From the underground photo hide we watched these two elephants drink, only a few metres from us.

Hyenas Ever the opportunists we have had quite a few hyenas wander through our bush dinner sites to see if there are any ‘doggy bags’ on offer. Of course, there are not, and they are discouraged from milling around. They must have got the message because on one morning seven spotted hyenas were found feeding on a wildebeest carcass.

Cheetahs The month’s cheetah drama was when the short-tailed cheetah was hunting, and caught an impala. Then a big baboon came and rescued the impala! The impala made its escape and the cheetah gave chase but missed her prize.

I came across this magnificent white rhino bull wrapped in blue pink mist. It was such a remarkable scene - this huge, strong, cumbersome animal shown in such delicate sensitive light.

Rhinos There have been daily sightings of crashes of white rhinos, as well as short sharp encounters with solitary black rhinos.

Plains game Excellent plains game, as well as a couple of sightings of sable bulls and herds as well as a herd of seven Lichtenstein hartebeest. 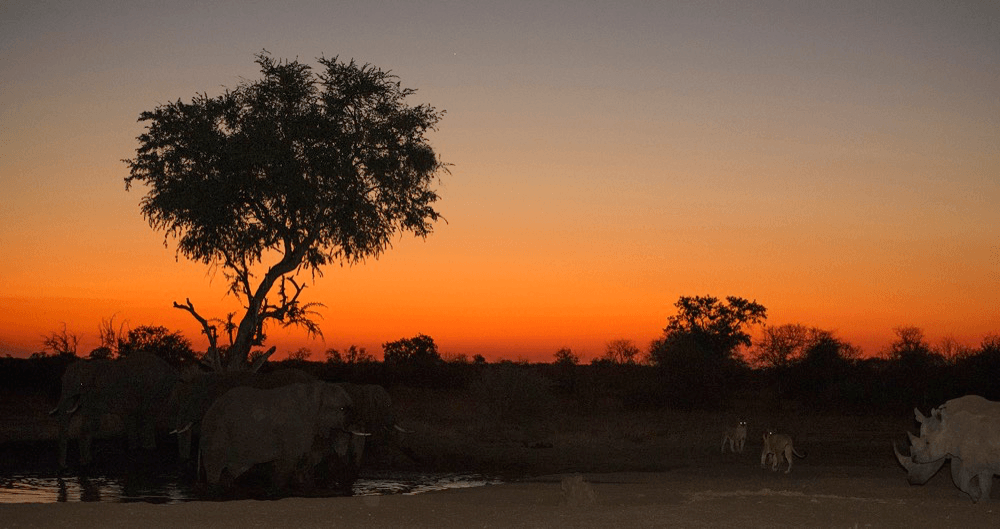 Competition at the waterhole: elephants refusing to leave, lions lurking nearby and two white rhinos also wanting to take their turn to drink

Singita Pamushana Lodge is the ecotourism arm of the Malilangwe Wildlife Reserve, and its role is to help foster the sustainability of the wildlife and broader ecology, while enabling guests to share the magic of the lodge and the reserve. Visit our site to find out more about how this is achieved, or read the full Wildlife Report here.