Leopard sightings aren't exactly rare in Singita's 33,000-acre corner of the Kruger National Park; just last month, field guide Brian Rode recorded 35 separate sightings in his Wildlife Report! Although usually an elusive species, the leopards and other wildlife in this area are habituated to the game vehicles and don't perceive a threat, so their natural behaviour is largely unaffected by a passing Land Rover. This makes for some spectacular game viewing, as Brian describes below: 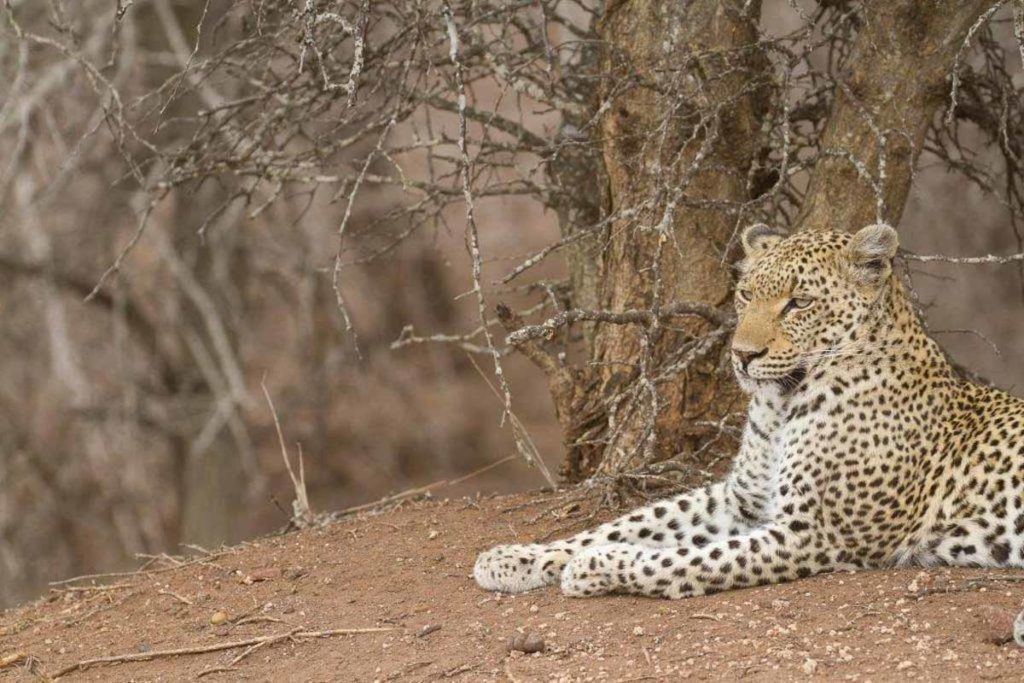 "We have had quite a few sightings of these beautiful cats in September. The Ndlovu male and the Xinkelengane female featured the most regularly - both are very relaxed leopards and we generally get good views of them. One morning we came across the Ndlovu male close to the river near Croc View; the tracks in the area indicated that he had stolen an impala kill from a female leopard and had hoisted it into a large leadwood tree. It was a great sighting and he remained in the area near the carcass for the next two days. 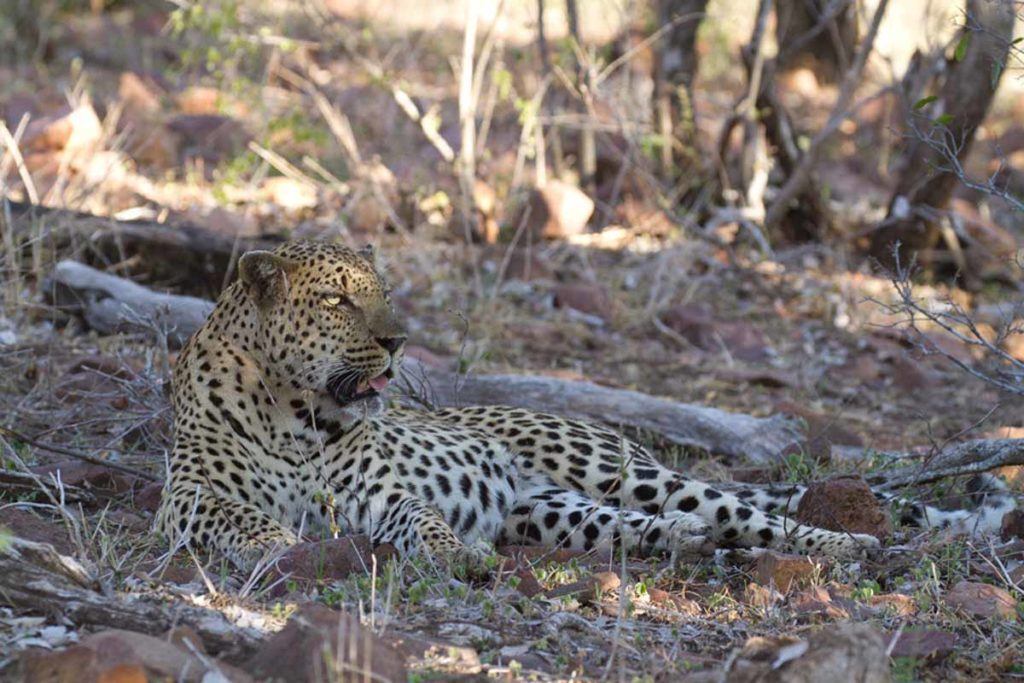 We did not see him again for a few days, but just after mid-month, trackers Lawrence and Charles found his footprints and followed them until they located him in a drainage line near Ostrich Link Flycamp. Unfortunately, he spotted them (pardon the pun) and ran towards a nearby ridge where we could not follow. We could, however, still see him from a distance. He lay down in amongst the rocks and shrubbery and with his amazing camouflage he blended into the surroundings and was almost invisible. 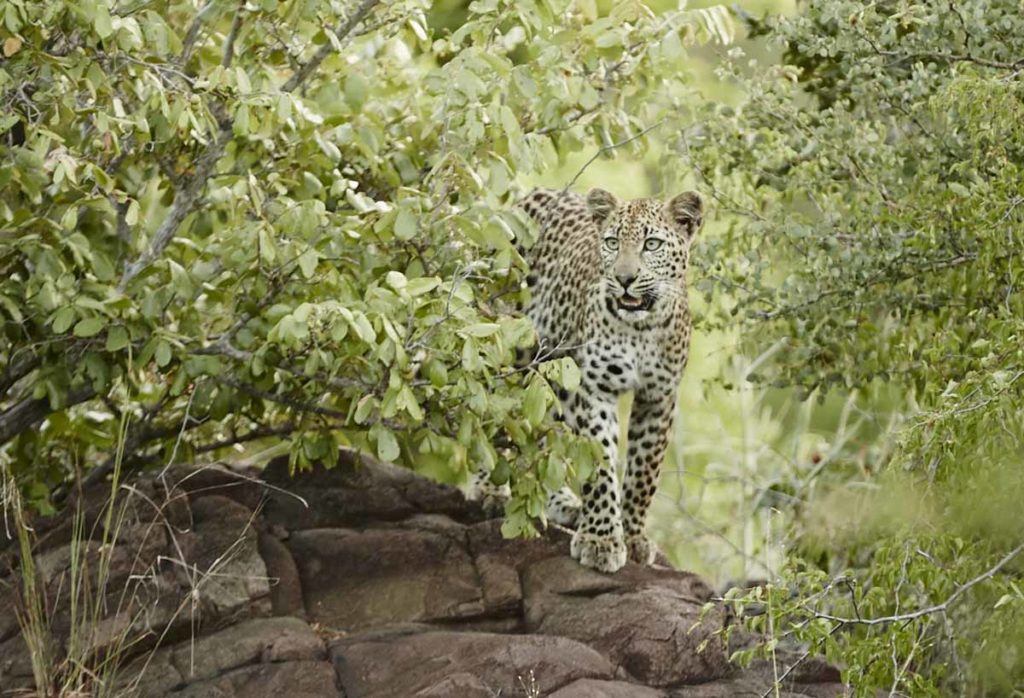 The next morning, Giyani was driving along Ndlovu Road when he found the relaxed male leopard with an impala kill in a flimsy tree. We had good views of him lying near the base of the tree guarding the carcass. That afternoon, Collen was passing by the area when he noticed that the kill had fallen out of the tree. He and his guests then had a fantastic sighting of the leopard as he dragged the meat to another, larger pod mahogany tree and climbed up its trunk with the impala in his mouth. These are incredibly powerful animals; imagine being able to hoist a large carcass, while climbing up a smooth tree trunk and carrying all that weight in your mouth! 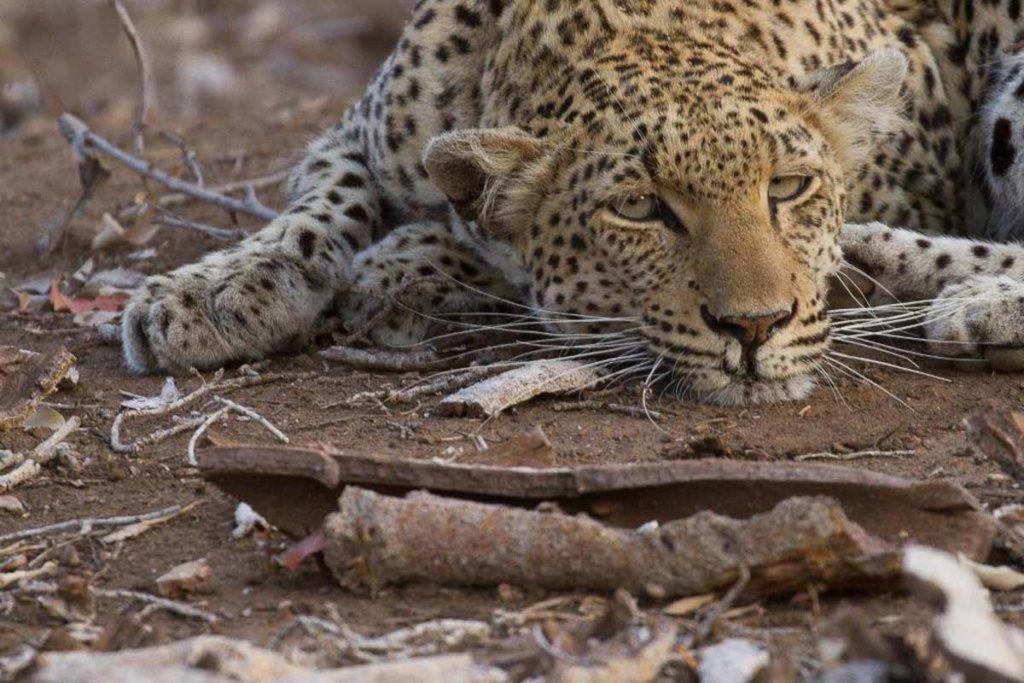 Towards the end of the first week of the month, the Xinkelengane female was seen moving in the vicinity of Gudzani Dam. The dam is dry at the moment but the elephants have managed to dig a small hole in the sandy riverbed below the dam wall, which has exposed some of the underground water and this has allowed the impalas and other animals to drink there. Shortly afterward, we found her with an impala kill north of Warthog Pan in the Central Depression area, and she remained with the carcass until all the meat was entirely consumed. Right at the end of the month we found her in the company of a shy, unknown male leopard. She was flirting with him and we assume that they were mating! 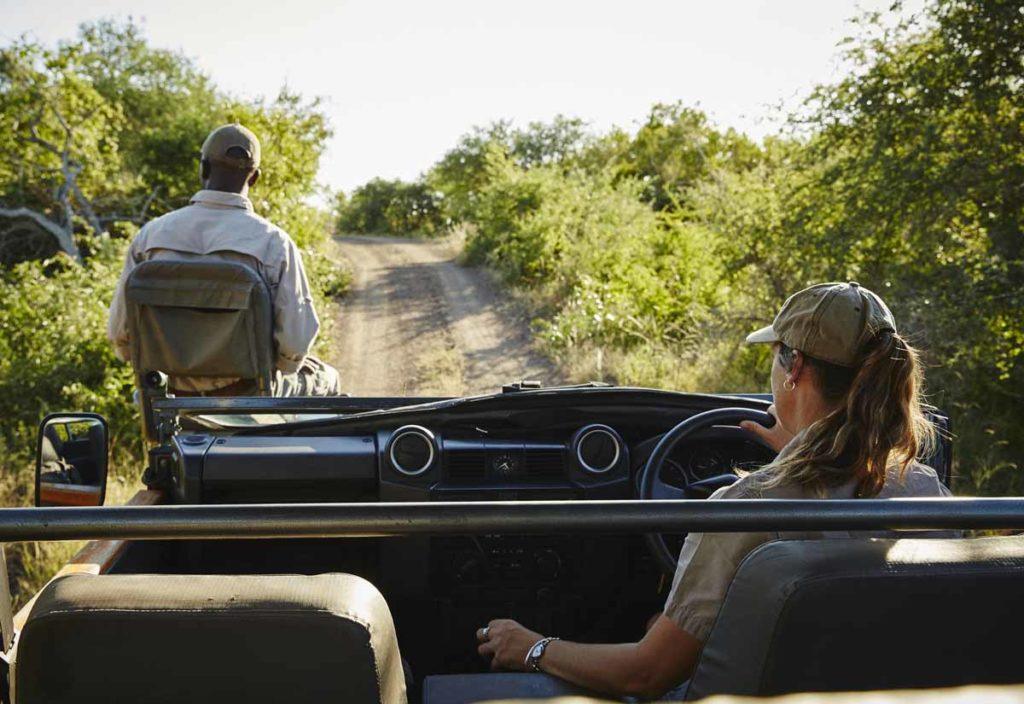 One evening later in the month we found a female leopard spray-marking the large trees near the area known as Butterfly Crossing, and we noticed that she was lactating. We were unable to identify her, but believe that she could be the Stickythorn female. The next afternoon she was seen in the same area. The guides watched her as she climbed up one of the nearby ridges. When she got up to a particularly rocky area she started calling softly and the guides then heard some soft sounds coming from the rocks. Then, suddenly two tiny little heads popped out from a small cave in the rocky hillside. It appears that she has new cubs hidden somewhere on the ridge - this is awesome news! We have also been seeing an unknown male leopard in the western side of the concession. He was seen with a warthog kill nearby Gudzani Dam and then later seen further north in the concession. The Mhlangulene female was also seen once this month, as was the N’wanetsi male." 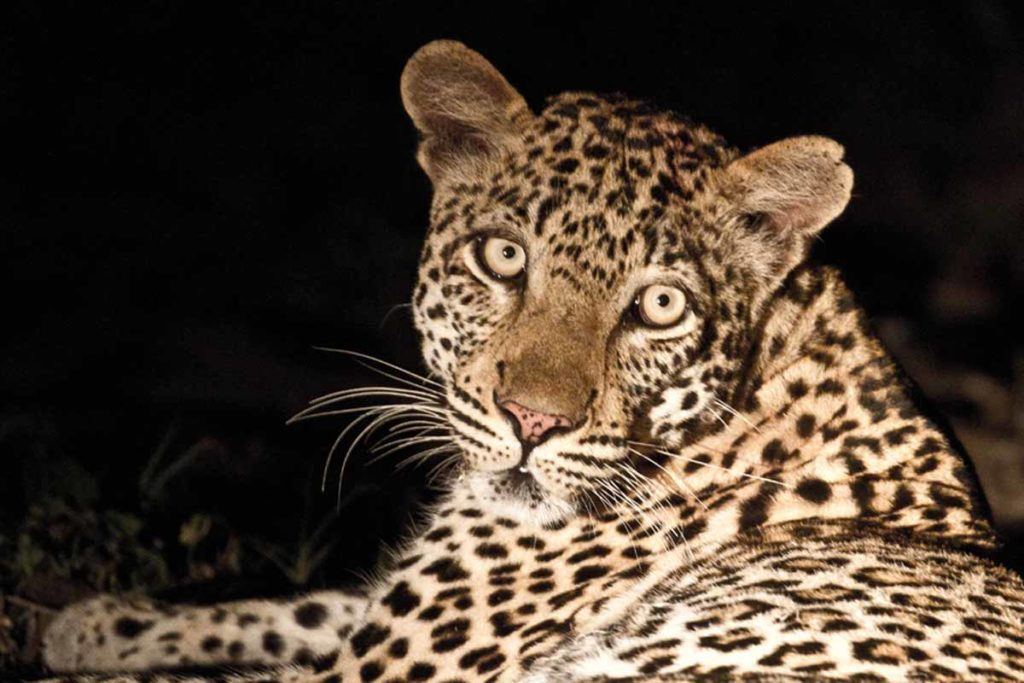 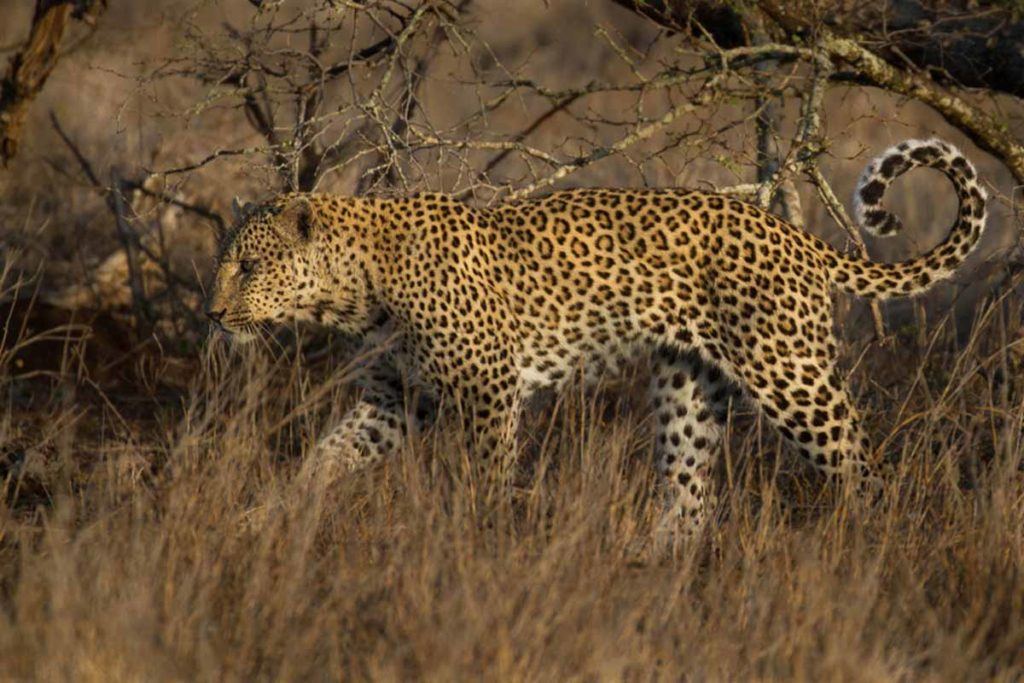 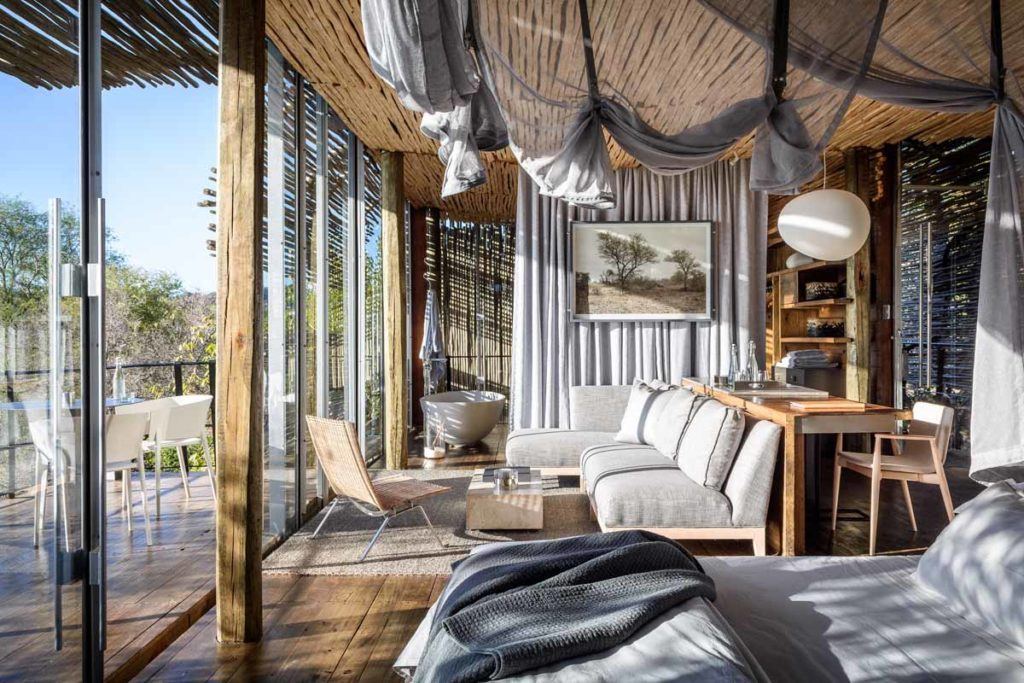 Singita Kruger National Park is home to two of Singita's twelve properties; Lebombo Lodge and Sweni Lodge. Singita's mission in the area is to create and maintain a balance between conservation, community development, and ecotourism, and these lodges have been built with this ideal in mind. Both integrate the 'touch the earth lightly' philosophy into every aspect of their daily operations and offer guests a unique safari experience in an isolated piece of pristine wilderness.