Guests at Singita's two private concessions in South Africa - one in the Kruger National Park and one in the adjacent Sabi Sand Reserve - have a front-row seat to some of the most spectacular wildlife sightings in the world. These unforgettable encounters with the continent’s most iconic animals are the result of the dedicated work of Singita's conservation partners who are tasked with the challenge of managing the land and its fauna and flora so that they resemble their original, undisturbed state as closely as possible. The monthly wildlife reports from our team of field guides provide an overview of animal sightings, and seasonal changes in the landscape; each one a testament to Singita's total commitment to the preservation and protection of these areas. 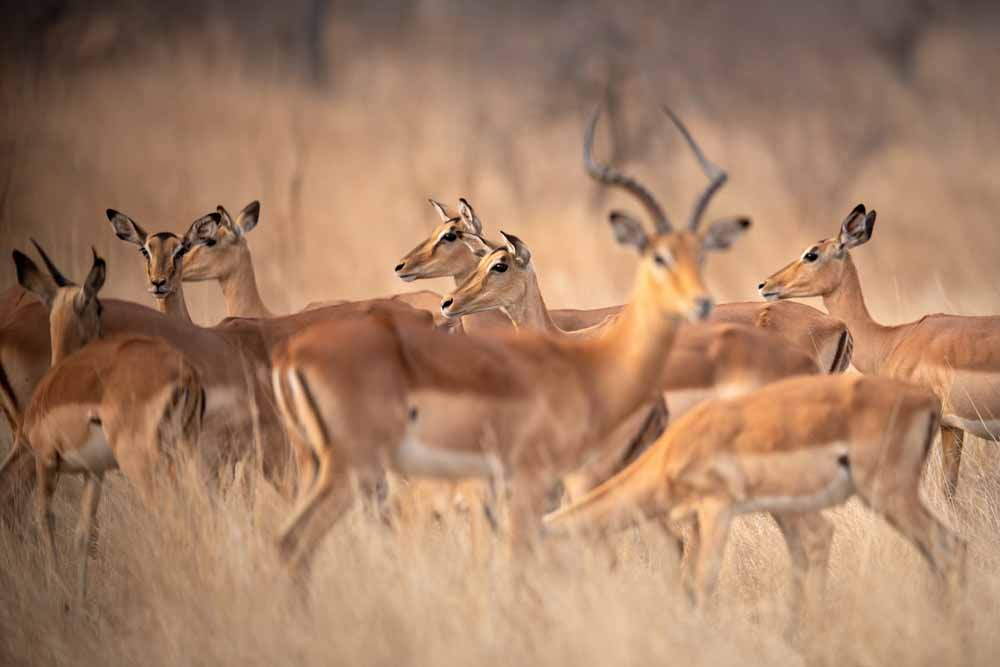 The latest wildlife reports from the region offer some insight into recent animal activity, as told by the field guides on the ground.

It was a promising start to October, as we woke up with overcast and cool conditions that soon resulted in light rainfall. The rain lasted only a day; settling the dust and dampening the dry earth. The smell was invigorating; it was Africa at its best. The cooler conditions prevailed throughout the month. The dryer season allows guests to experience wildlife in larger herd numbers with greater predator interactions. With the mass movement of the larger herds, the dust increases allowing for spectacular sunsets of deep pinks, oranges, reds and purples as dusk descends. 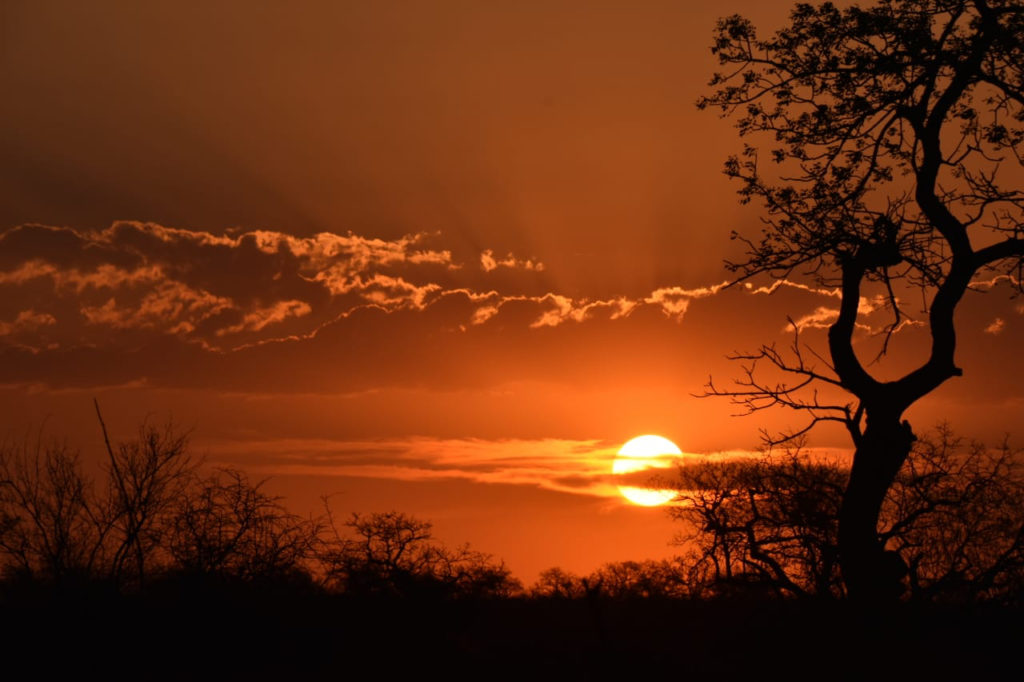 Here is a snapshot of the month’s sightings, filed by our field guides:

Lions: The recent rain was the first sight of water falling from the sky for many of the litters that were born within the latter part of this year. It was a touching moment to watch. The cubs are doing well in both of the most frequently viewed prides, namely the Mhangene and Othawa prides. Leopards: It is starting to get very interesting with all of the leopard action at the moment - it's actually difficult to keep up! We had a recent visit from the Kashane male leopard who we watched successfully hunting water monitor lizards along the drainage line. He is a large, handsome leopard who we know well and although he's moved out of the area, his visits to his old territory always make for special encounters. The Hlab’Nknzi female and her young male offspring are frequently sighted along the Sand River, in addition to her daughter, the Schotia female, and her young male cub. The leopards are definitely capitalising on the abundance of wildlife attracted to the grasses which have popped up in the sandy soil of the river bed. 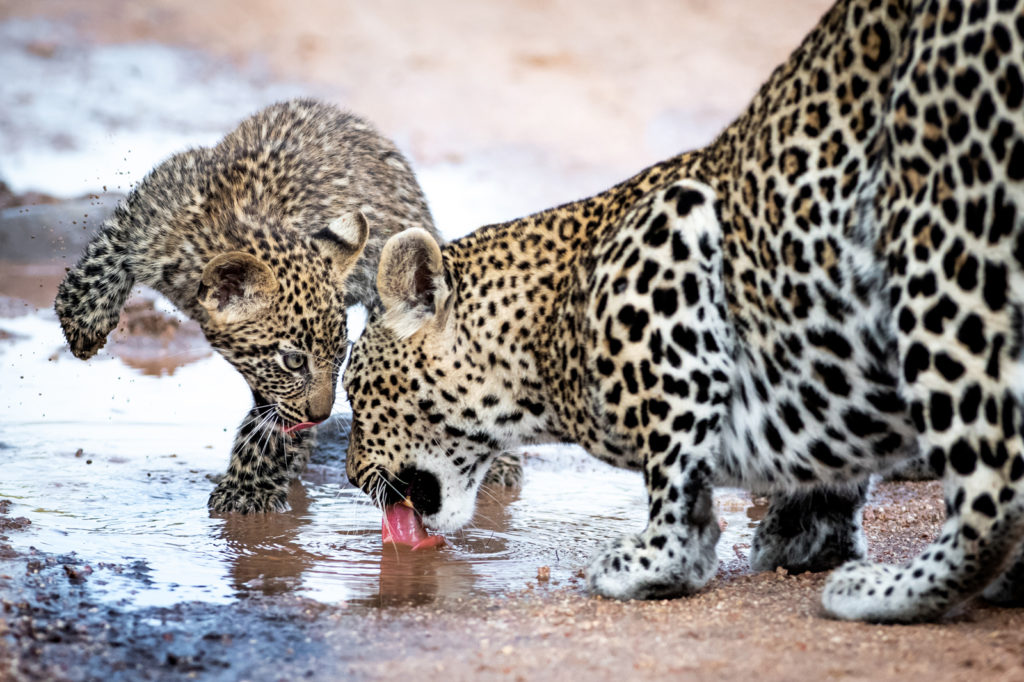 Elephants: Within the last week, four large groups of elephants numbering well over 100 individuals converged just west of the lodges. It was a noisy commotion along the muddy riverbed, as the elephants quenched their thirst and cooled themselves down, splashing mud behind their ears. Some of the younger elephants decided to roll around in the mud as this seemed more appropriate… and a lot more fun! 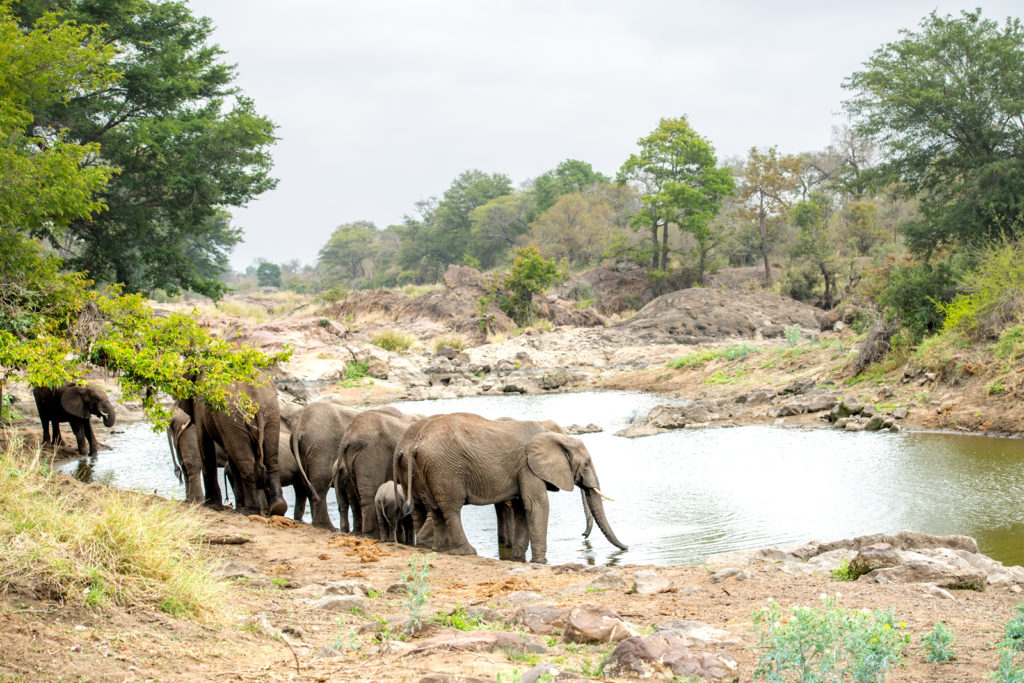 Hyenas: An active den-site has been found this month and we are in awe as to how many hyenas often gather around these very social mounds. With cubs of different ages, it often results in sightings of interesting interactive behaviour between the ranking orders. 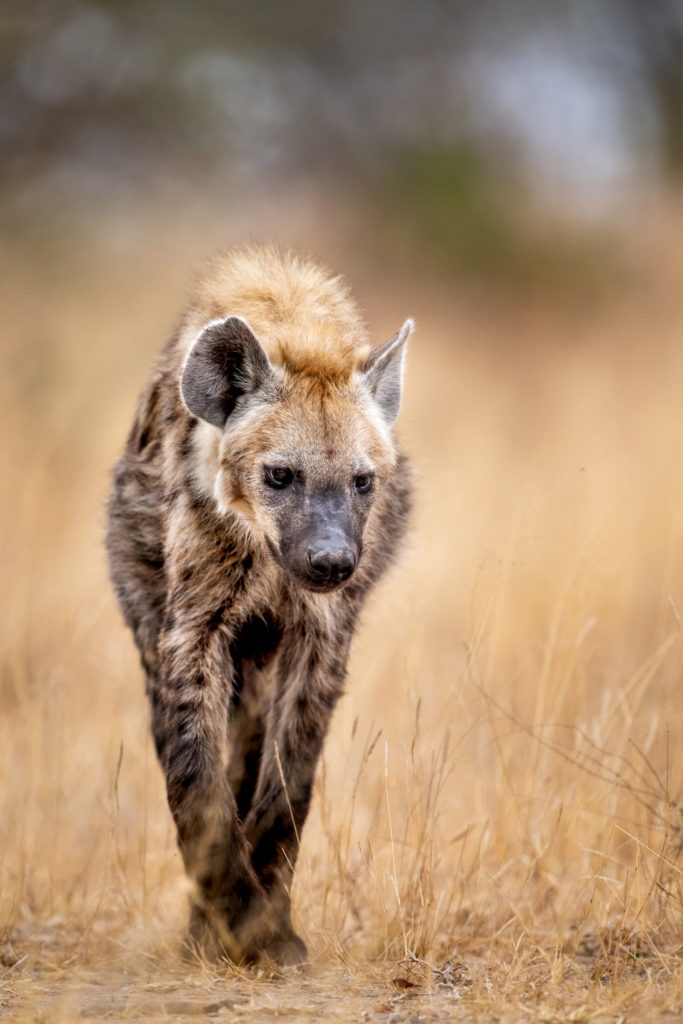 Birds: The total bird count for the month of October was 191. Specials for the month included the return of the lesser spotted eagle, Jacobins cuckoo and a congregation of marabou, yellow-bill, saddle-bill, black and woolly-necked storks feeding at Pios crossing. 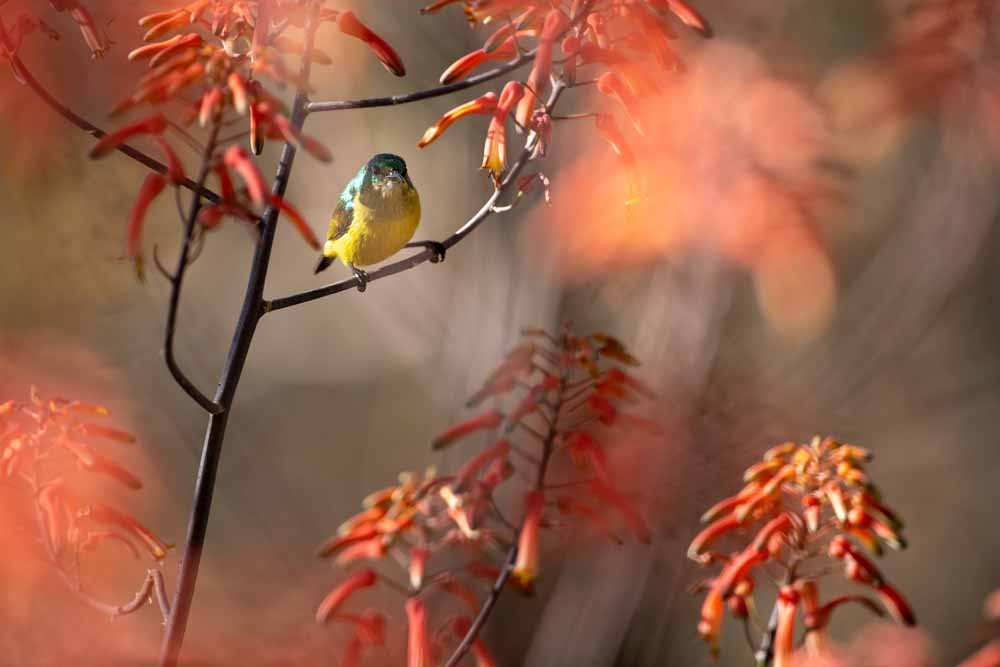 October is generally warm, but this year it was exceptionally cool and overcast. The first light dusting of rain arrived, and with that the new green grass and leaves started to push through the arid landscape. The rain was not enough to contribute much to water levels in the rivers and dams, but fortunately there is still enough water to sustain the wildlife in the area. Great numbers of impala, wildebeest and zebras have consequently arrived, along with migratory birds like the European bee-eaters, whose turquoise and brown wings are dotting the skies again. The Wahlberg’s eagles are building and remodeling their nests, and breeding is in full swing. 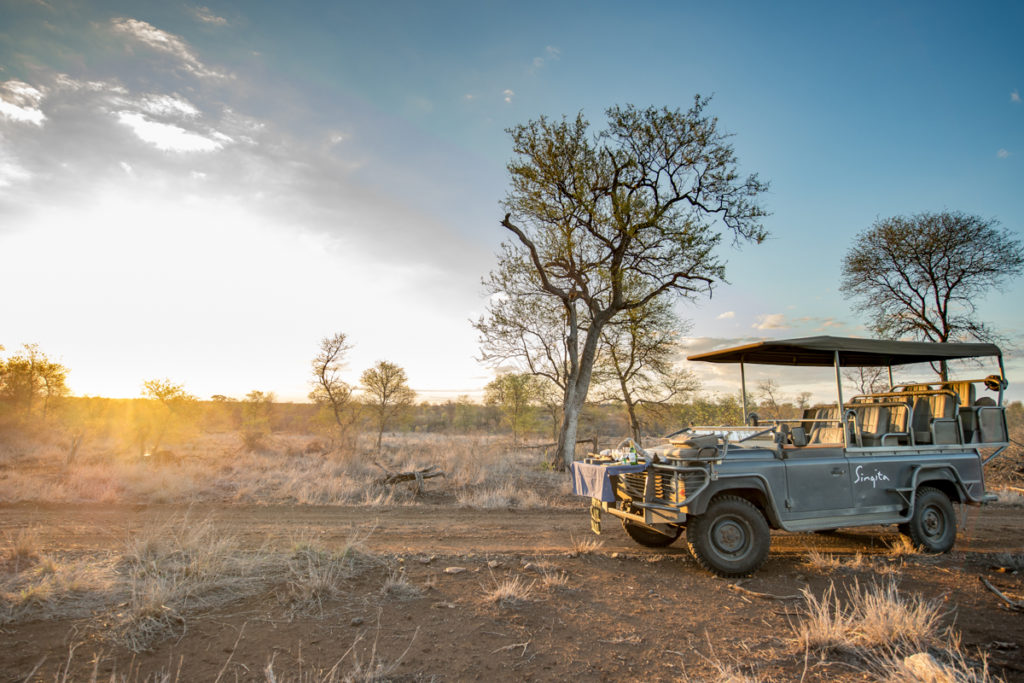 A snapshot of sightings for October, as recorded by our team of field guides:

Buffalos: Buffalo sightings have been fairly sporadic this month, with regular gaps between sightings of these formidable bovids. Herds of over 200 individuals have been seen moving into the concession from the west to drink at the dwindling water that remains in isolated pools along the N’wanetsi River. The noise of hundreds of hooves, and the bellowing of quarreling herd members can be heard from a great distance, drawing the attention of the big cats. The arrival of the lions is usually the driving force behind the buffalo leaving the area. Some guides and guests were fortunate enough to witness a sensational battle between the herd and the Shishangaan pride. The pride killed a fully-grown buffalo cow and, while they were feeding, the entire herd came back and chased them off. A 45-minute standoff ensued, accompanied by snorting, grunting and lots of growling from these somewhat forlorn-looking cats. Once the lions had successfully been chased off, the herd came one by one to smell her carcass in an almost ritualistic display. It was extremely interesting behaviour to witness and showed a more emotionally complex side to the buffalo. 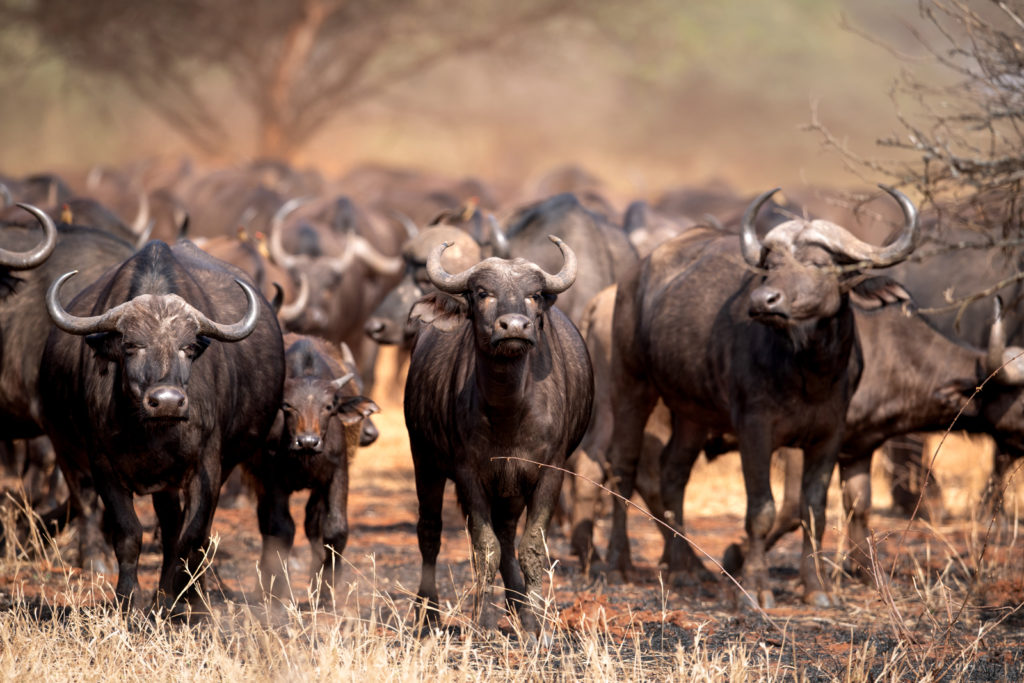 Elephants: Elephants have been viewed daily this month; in fact, there have been over 120 different elephant sightings recorded. With the dryer conditions, most of the water-dependent species, including elephants, have been found congregating around the N’wanetsi River and the pools of water which remain in front of both Lebombo and Sweni Lodges. These water sources have given guests some wonderful sightings of elephants (as well as other species) in between the morning and afternoon game drives. 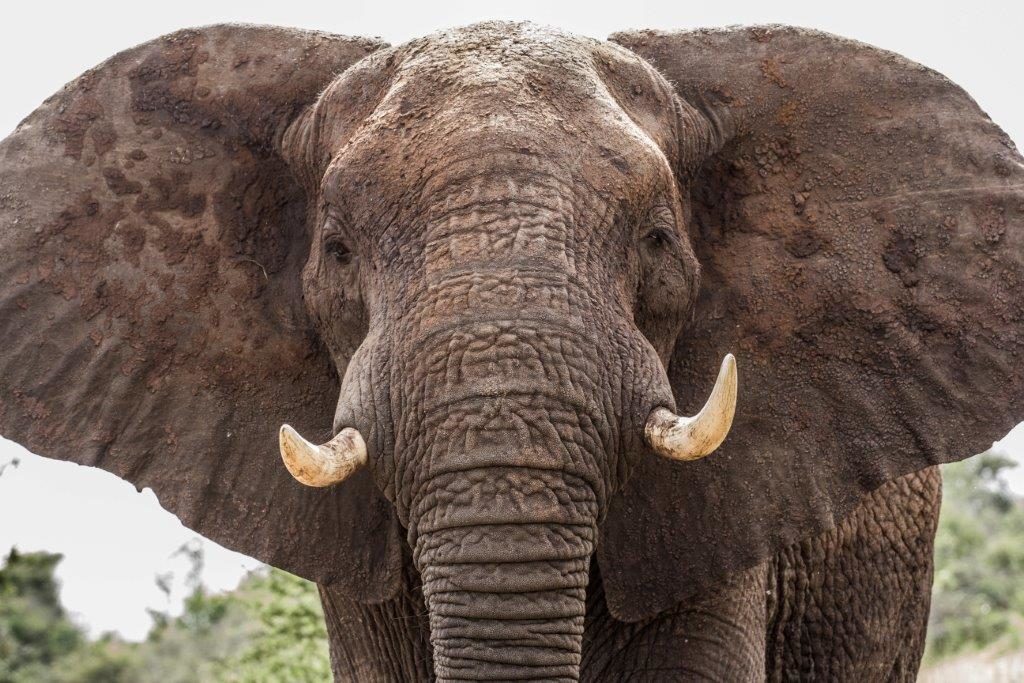 Spotted Hyenas: There were 40 different recorded sightings of spotted hyenas during the month of October. Most were of hyenas at the den-site that is nestled in the Granophyre Ridge but there were also a few sightings of hyenas on the move. We were also privileged to watch hyenas and leopards interact around carcasses on multiple occasions this month. Usually, the hyenas were seen patiently waiting for scraps at the base of the trees in which the leopards had hoisted their food. 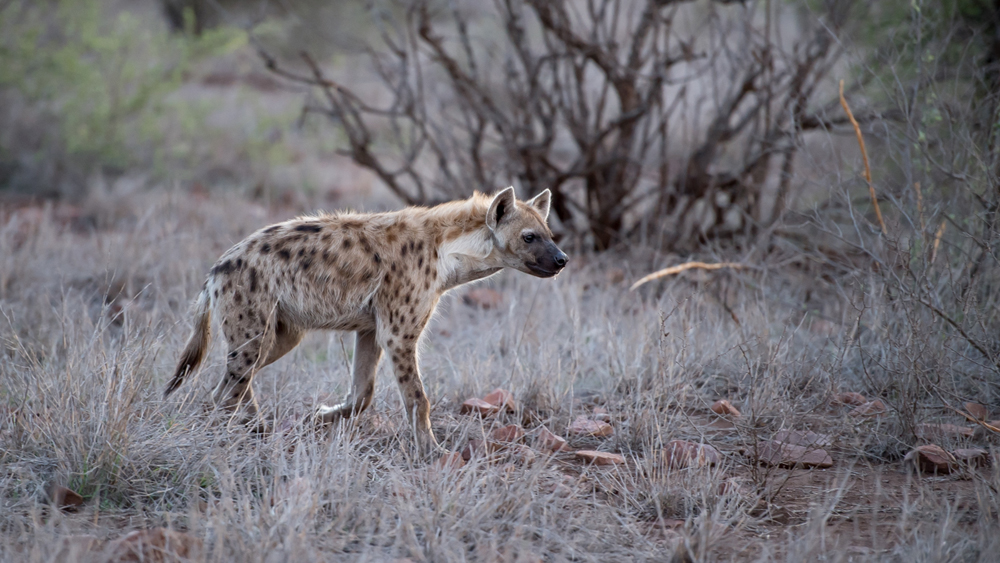 Lions: The Mountain pride were the most frequently viewed lions last month. The cubs are a definite highlight, especially when they are found playing with each other and with their older cousins. The older cubs that have been suffering from mange are slowly recovering from the itchy ordeal and their fur is starting to grow back. Mange is not an uncommon disease, but unfortunately it can weaken an animal, and in some cases, the decreased immunity can even be fatal, so it is a relief to see the youngsters recovering. The fact that the Mountain pride lionesses are exceptional hunters attributes to the cubs wellbeing, as the mothers are getting enough food for themselves to produce sufficient milk on which the cubs can thrive. 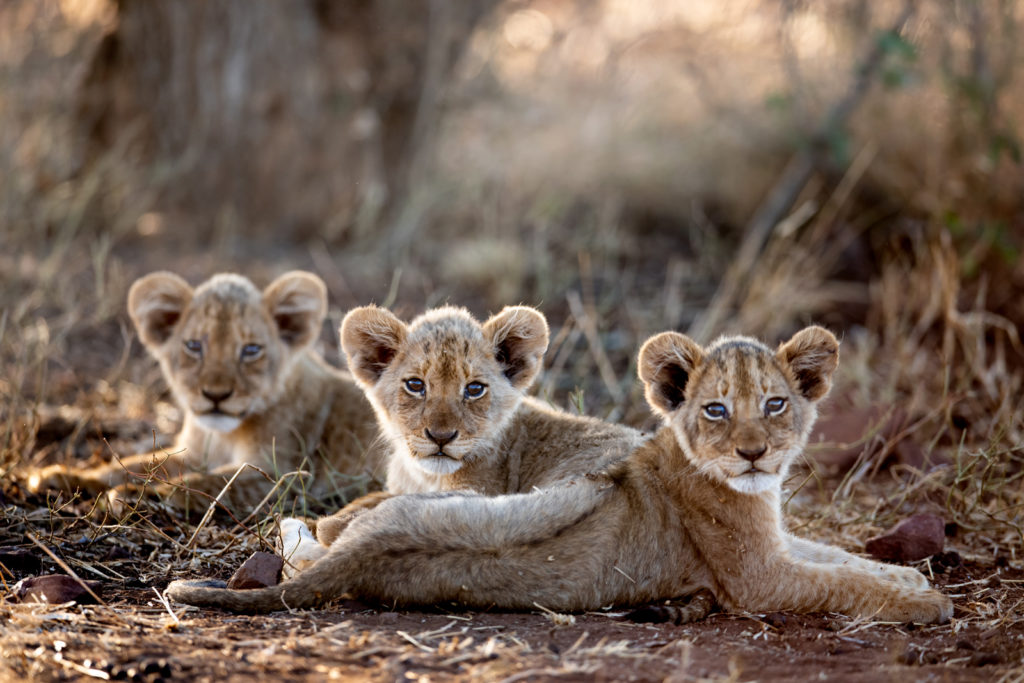 The Shishangaan males were also seen regularly this last month, with the big, temperamental, black-maned male being spotted most often. As he has a hip injury, he cannot patrol as far as his able-bodied brothers can, and unfortunately with the coalition of three often having to break up in order for the males to protect their turf from intruders, the two smaller bothers were attacked by another coalition of unknown male lions. Fortunately, they were not too badly injured, but with bite marks on one’s shoulders, and with fresh blood still oozing from the other’s back, the males are walking a bit slower than usual. Hopefully this won’t hinder their patrolling, as their defence against intruder males is vital for the cubs’ survival. 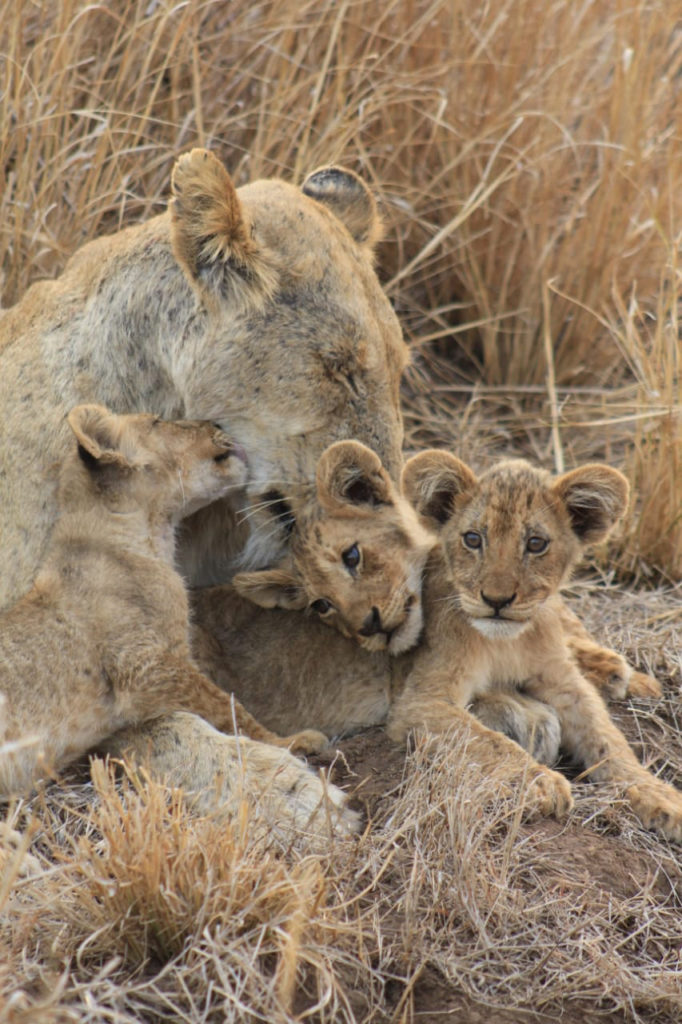 The possible intruders were found again at the end of the month. These unfamiliar newcomers are very relaxed around vehicles, so it is assumed that they have not come from Mozambique. They are also much bigger and older than the rogue male lions that were killing off members of the Shishangaan pride earlier this year. Only time will tell if these three will become the new pride males of the Singita concession. The Xhirombe pride was also found, and the mother and son duo had made several kills next to the Mozambique border. He is looking as handsome as ever. 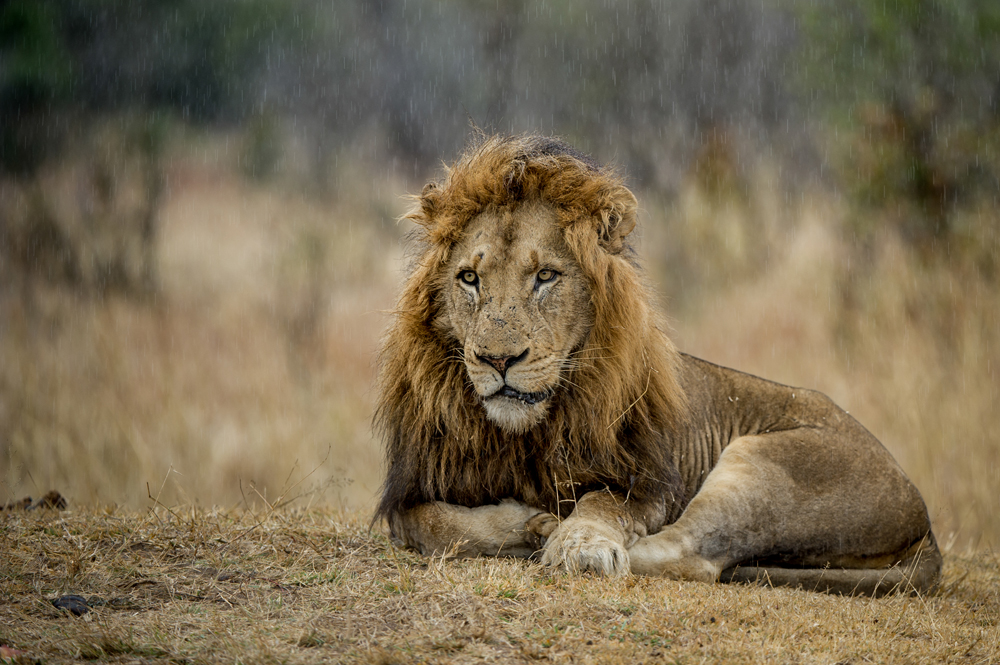 Cheetahs: We have recorded about 15 different cheetah sightings this month. Most of these sightings were of a mother cheetah and her three sub-adult cubs. Cheetahs are rare in this area and camouflage very well in the dry grasses, which has made finding them even more challenging. On October 12th, a few guides were treated to an amazing sighting of the mother cheetah hunting and catching a heavily pregnant impala ewe. The three cubs ran towards their mother and watched attentively as she killed the impala. Although these cubs are still too young to be hunting themselves, it is through these kinds of experiences that they learn how to go about it. Leopards: October was extremely productive in terms of sightings of these elusive cats. The sparse vegetation and concentrations of game has provided rather reliable viewing. The young and handsome Dumbana male has a relaxed attitude and his preferred areas have enabled our guides and their guests some spectacular viewing! A few nights ago, the nervous barking of a troop of baboons alerted all to the presence of this youngster as he was found sauntering along the banks of the N’wanetsi River. Suddenly the youngster stopped dead in his tracks, and with his head lowered towards a dense clump of grass it became obvious that he had found something in the thicket. Upon further inspection it was noted that he had walked into a huge crocodile that was lying out on the bank. He moved closer to a crocodile out of curiosity and began snarling, and after prodding at the croc, the huge reptile hissed and lunged backwards. The youngster then carried on with his patrol, sniffing the cool night air, when out of nowhere another leopard was spotted on the opposite bank of the river. The second leopard walked straight towards the young male, at which point it transpired that it was his mother, the Dumbana female, who has not been seen in a long time on the Singita concession. 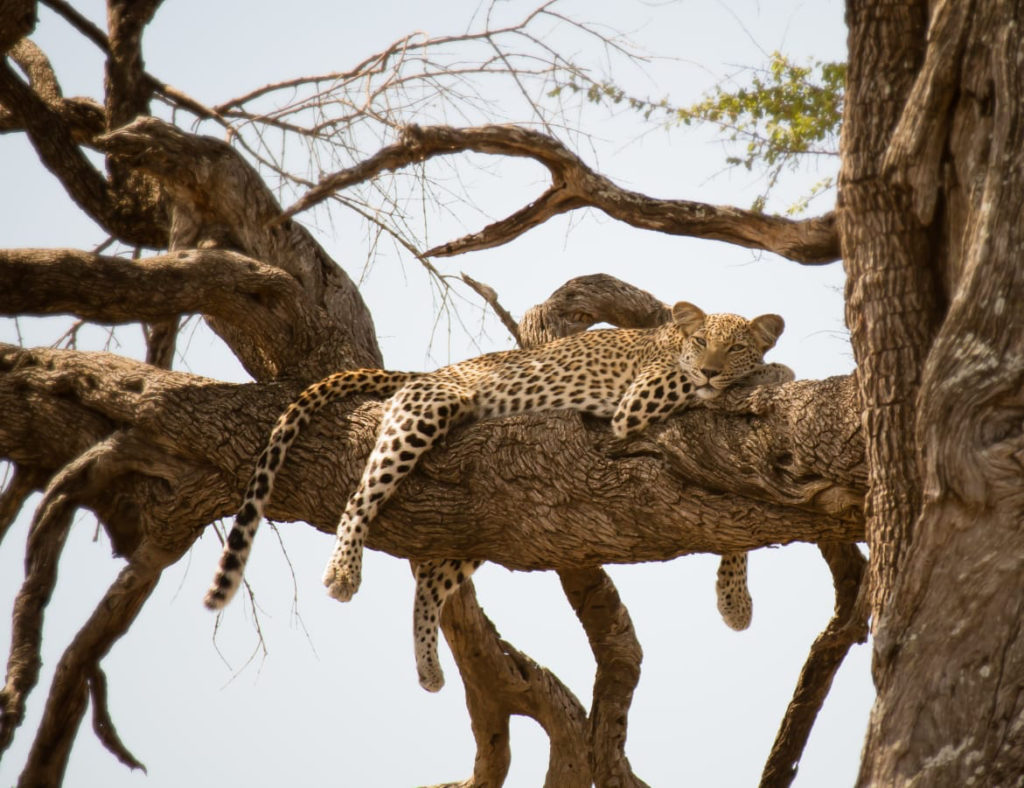 Other interesting sightings: October also saw the early arrival of some baby animals. Some guests were fortunate enough to witness a baby giraffe being born near Ndlovu lookout. The mother stood close by, grooming her wet offspring as the baby tried to stand up for the first time. After many failed attempts the baby finally managed to gain its footing in order for the mom to nurse it. A truly magnificent sighting. Another very unusual sighting was two large crocodiles mating in the water at Puff Adder Pools - a first for many of us. 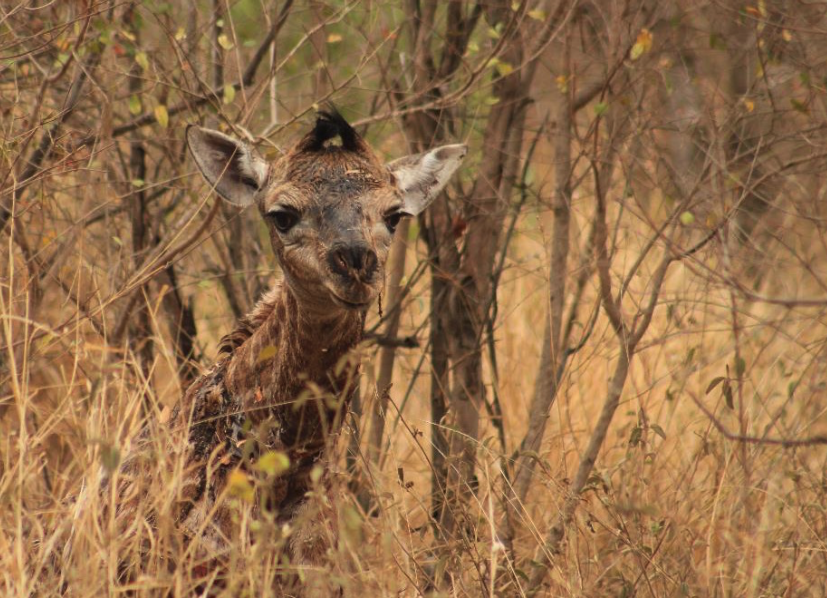 Driven by a deep and life-long love for the African bush, Singita’s team of expert field guides takes our guests on an extraordinary journey through the wilderness, bringing the importance of our conservation work to life along the way. You can meet our guiding teams here and learn more about our conservation projects - whose success relies on the generous support of donors - here.