Feast & Famine: Times of Plenty in Occasions of Drought

As game rangers, conservationsists and animal lovers, it can be extremely difficult to see the landscape and wildlife suffering during a drought. The current, severe lack of rain in the Kruger National Park area has caused a knock-on effect with food supplies, making it extremely difficult for grazers to find grass on which to feed. This, in turn, weakens the herbivores, making it easier for big cats to hunt them. Field guide, Leon van Wyk, tells us more about how these conditions are affecting the interaction between some predators and their prey at Singita Sabi Sand:

"While the vast majority of mammal species have coped remarkably well with the extended drought that is currently being felt here, two of the mega-herbivore species that have really felt the effects of limited grass availability are the hippo and buffalo. While the hippopotami in this area are doing somewhat better than those in the Kruger National Park, I have noticed a more than slight decline in the overall condition of the buffaloes in recent weeks. Apart from looking a little on the thin side, there also seems to be a reduction in their spirit. Even just the way the walk when making their way towards water for a drink, betrays the fact that they are indeed struggling. We certainly hope that rain will come soon, and that the condition of the buffalos will again improve. 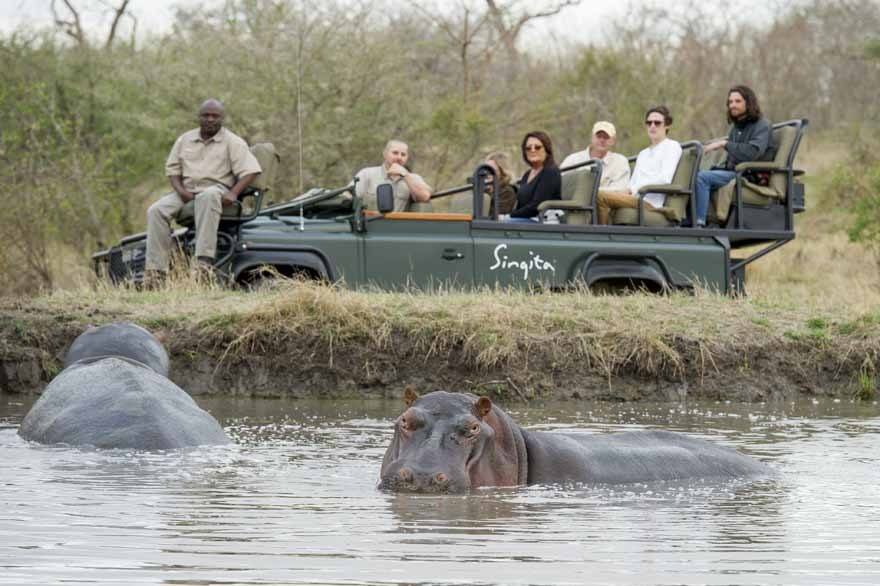 Nature may appear harsh, but it is fair, and it has its way of balancing things out. In his article, Ian Mey made brief mention of the balance between lions and buffaloes currently favouring the lions. As he mentioned, those buffaloes that do survive will be able to carry their genes forward into the next generation. Just in the past few weeks, I have witnessed three different buffalo kills take place. The three kills were so different from each other, that it is worth briefly comparing them. 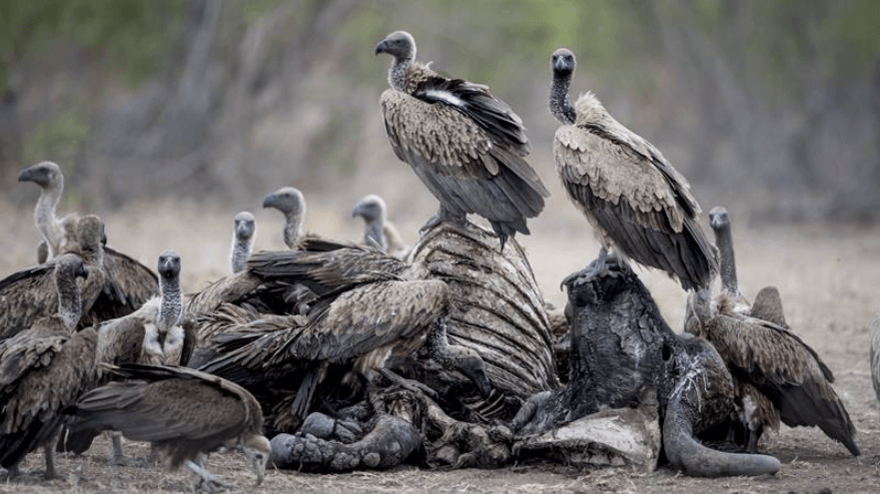 The first kill was a gruesome one to witness, as five of the sub-adult lioness of the Mhangene pride advanced on a group of several buffalo bulls along the Mobeni stream one evening at dusk. Their chosen target was an already injured bull (he had survived a lion attack a few weeks earlier). It took these five lionesses over an hour to subdue this buffalo, as he was not giving up, and dragged the lionesses several hundred metres. The other buffalo bulls in the group tried their best to assist their companion, and the lionesses found this quite disconcerting. It was only when four sub-adult male lions (also Mhangene pride members) heard the distress calls of the buffaloes and came to assist their sisters, that the job of killing the buffaloes was completed more swiftly.

"Should you shield the canyons from the windstorms you would never see the true beauty of their carvings." ― Elisabeth Kübler-Ross

The second kill occurred during a morning game drive less than a week later, when four adult lionesses of the Mhangene pride, along with all their cubs and three adult male lions, were moving fairly steadily towards the Sand River. They were not actively hunting, and seemed more intent on getting to the river bed. However, they came upon a fairly large group of buffalo bulls. Expertly, the four lionesses, showing a wealth of experience, quickly arranged themselves into hunting formation, and within minutes they were running into the herd. They selected their target, jumped onto his back as he ran, and within five minutes he was down. Suffocating the bull by closing off his nose and mouth in her jaws, a lioness ended his life much more swiftly than had been the case a few days previously, when the less experienced sub-adult lionesses had failed to find or apply the appropriate strangulation grip. Once the buffalo was dead, one of the lionesses walked back to where the cubs had retreated during the chase. She called them and then escorted them safely to the carcass, cleverly giving a wide berth to the numerous bulls that were standing around, looking on. 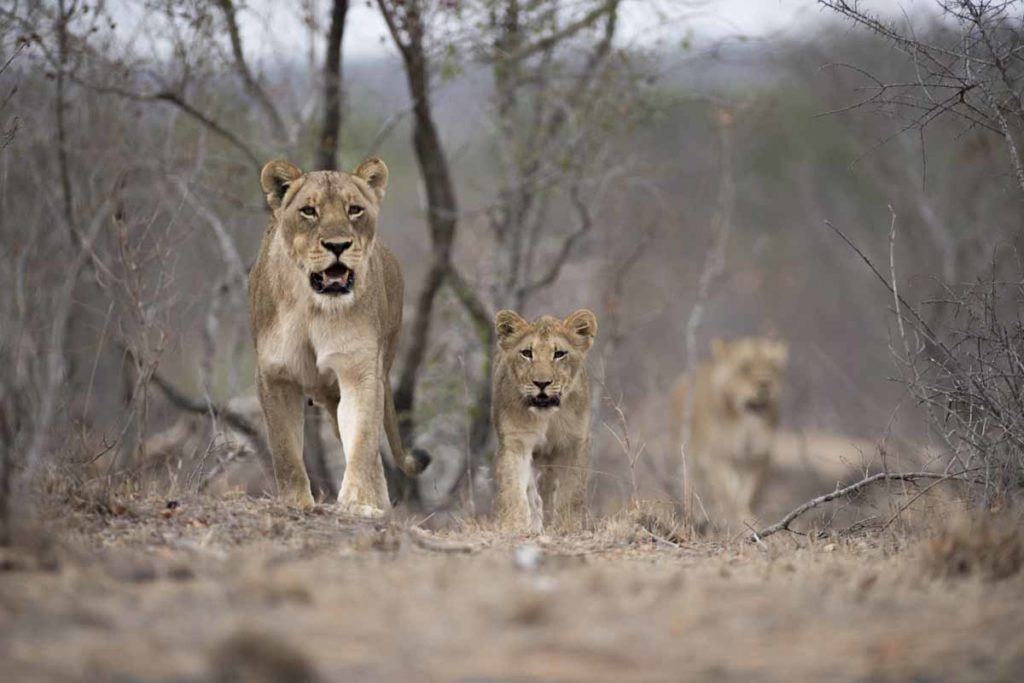 The third kill was again quite different, in that the four adult lionesses and two of the older cubs of this same Mhangene pride waited near the reeds of the Sand River bed, as a very large herd of buffaloes moved very slowly towards the water course close to the lions. To cut a long description short, the lionesses moved out of the river bed and boldly ran straight into the herd of hundreds of buffaloes. We were able to see one lioness catch and pull down a very young buffalo (probably a little more than a year old), but it seemed that the other lionesses were otherwise occupied, as she was left unaided to subdue this youngster. It therefore took several minutes for her to finally get the buffalo off its feet and suffocate it. It turned out that the other lionesses had killed at least two more young buffaloes within just a few hundred metres of the first kill. 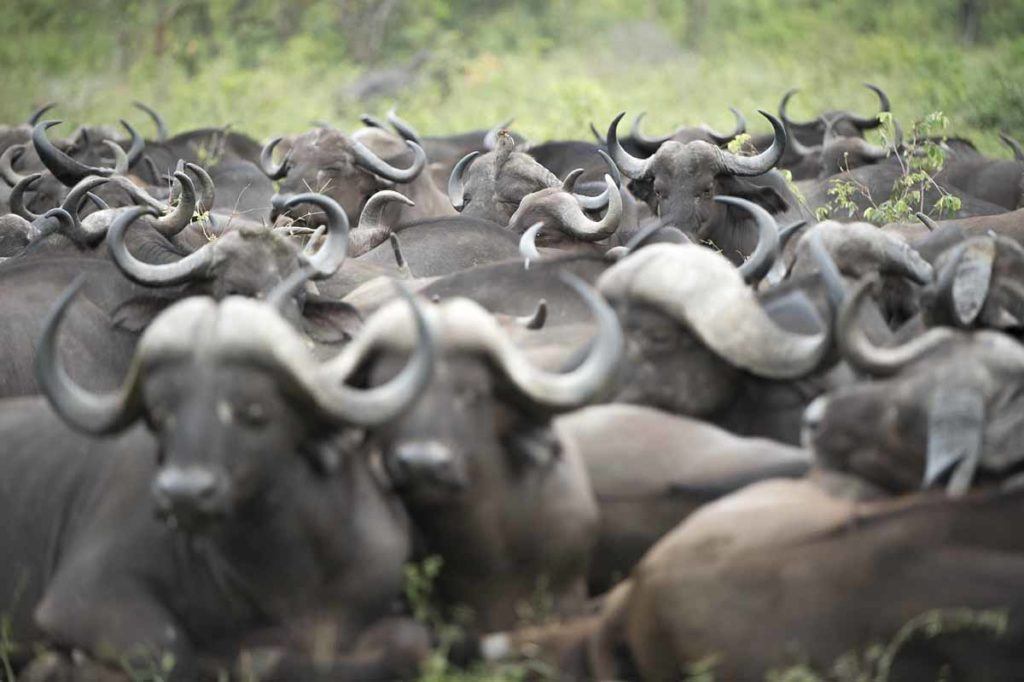 This spring, the number of buffaloes killed by lions has been unbelievably high, and it almost seems that often lions are not even bothering to hunt smaller animals. This is certainly not a typical situation but is purely a result of the lions taking full advantage of the weakened state of the buffaloes. It is a time of plenty for the lions and they will ride their good fortune while it lasts, for the wheel of life will keep turning, and there will again be a time when 90% of lion-buffalo interactions will end up with the buffaloes having the upper hand. Such is the way that nature works!" 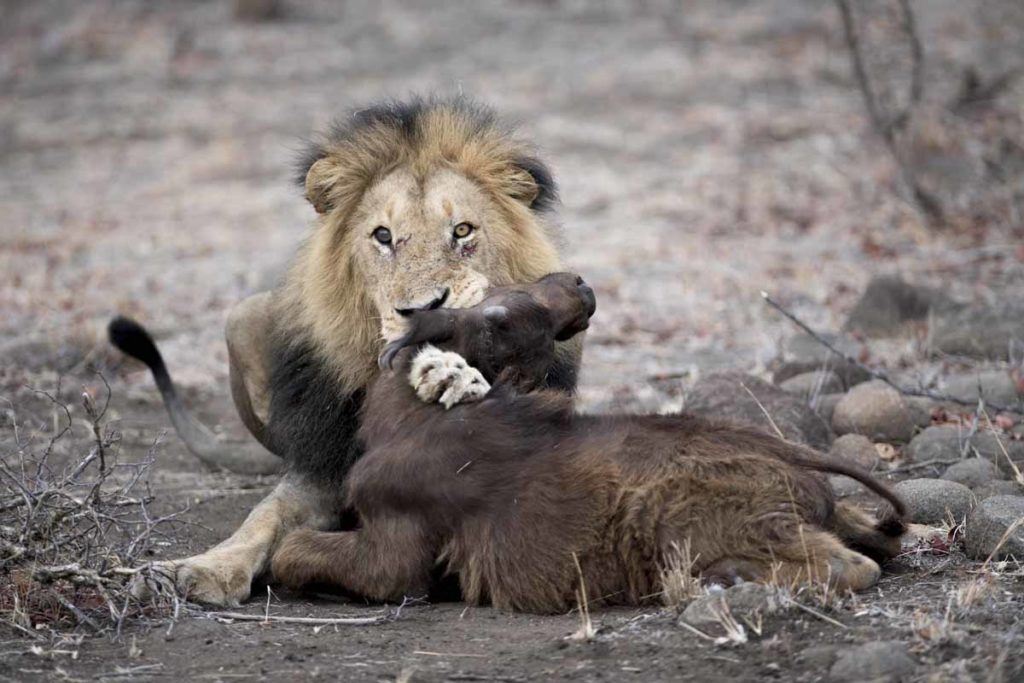 Drought is something that affects large parts of Africa on a regular (and increasing) basis, but this environmental phenomenon can have an upside, as field guide Ian Mey explains in this post about the Biological Benefits of Drought. You can also read more about the recent lion activity in this round-up from last month's Wildlife Reports.

With the opening of our first lodge in the Sabi Sand in 1994, Singita’s philosophy has been to protect large tracts of wilderness and wildlife populations for future generations. Consistent and dedicated conservation work in the concession has made Singita Sabi Sand a thrilling wildlife-spotting destination, and the area is renowned for high concentrations of big game like elephant, rhino and lion, and frequent leopard sightings.