The Malilangwe Wildlife Reserve, which is a protected area in southeastern Zimbabwe covering 130,000 acres of extraordinary wilderness and home to Singita Pamushana Lodge, lies on the border with the Gonarezhou National Park. It is an extremely scenic reserve characterised by beautiful, rugged landscapes and such prominent and enduring natural features as the red sandstone Chilojo Cliffs.

Singita field guide Jenny Hishin recently took a group of guests on a day trip to Gonarezhou to experience this unique ecosystem and its astonishing flora and fauna, and today she shares her photo diary with us: 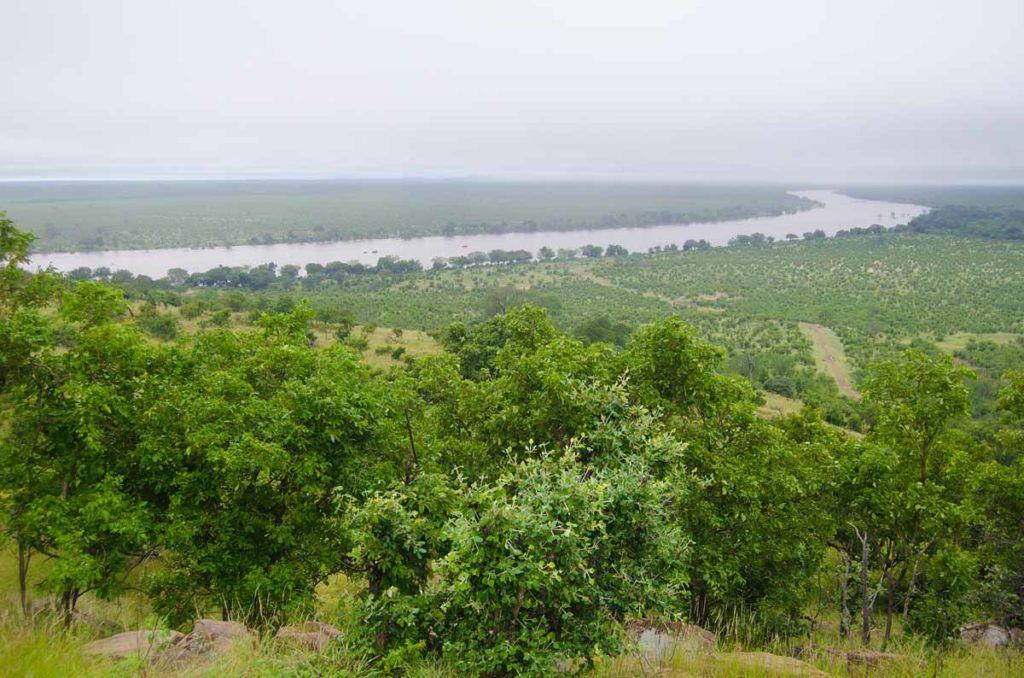 We set off on our day trip, armed with a packed lunch from the kitchen team at the lodge, and headed south through the Malilangwe Reserve to the entrance of the national park at Chipinda Pools. It was overcast with a slight drizzle, and we stopped off to watch the Runde River in full flow, carving its way through the valley. From this point, we followed the river to the Chilojo Cliffs, stopping for some excellent birding and game viewing along the way. The park is home to most of the same type of wildlife we see in Malilangwe, and has several packs of wild dogs roaming its expansive area. Its rivers are also home to aquatic wildlife such as the Zambezi shark, freshwater goby, black bream and the unique turquoise killifish. 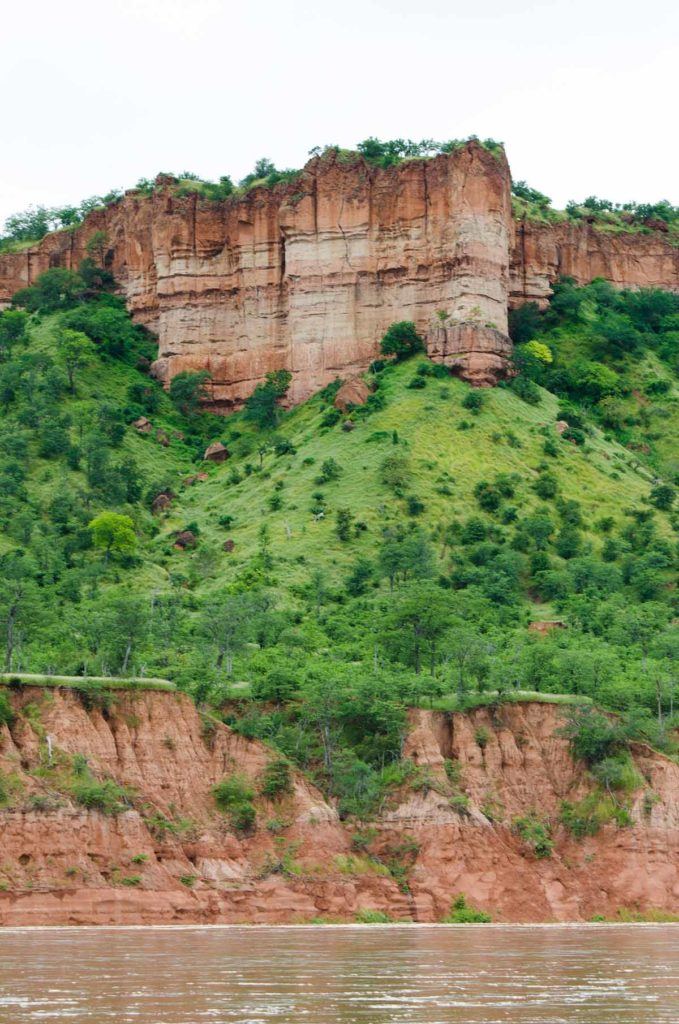 One of the most prominent and enduring natural features of Gonarezhou are these majestic Chilojo Cliffs. The striated red Jurassic/Cretaceous sandstone cliffs have been formed through eons of erosion and rise 180 metres above the river course. The Runde was such a contrast to its appearance in winter, when it’s no more than a dry trickle in a sandy river bed. Thanks to the rain, the strata of the cliffs looked saturated and clear and features like The Pinnacle stood out more than ever. 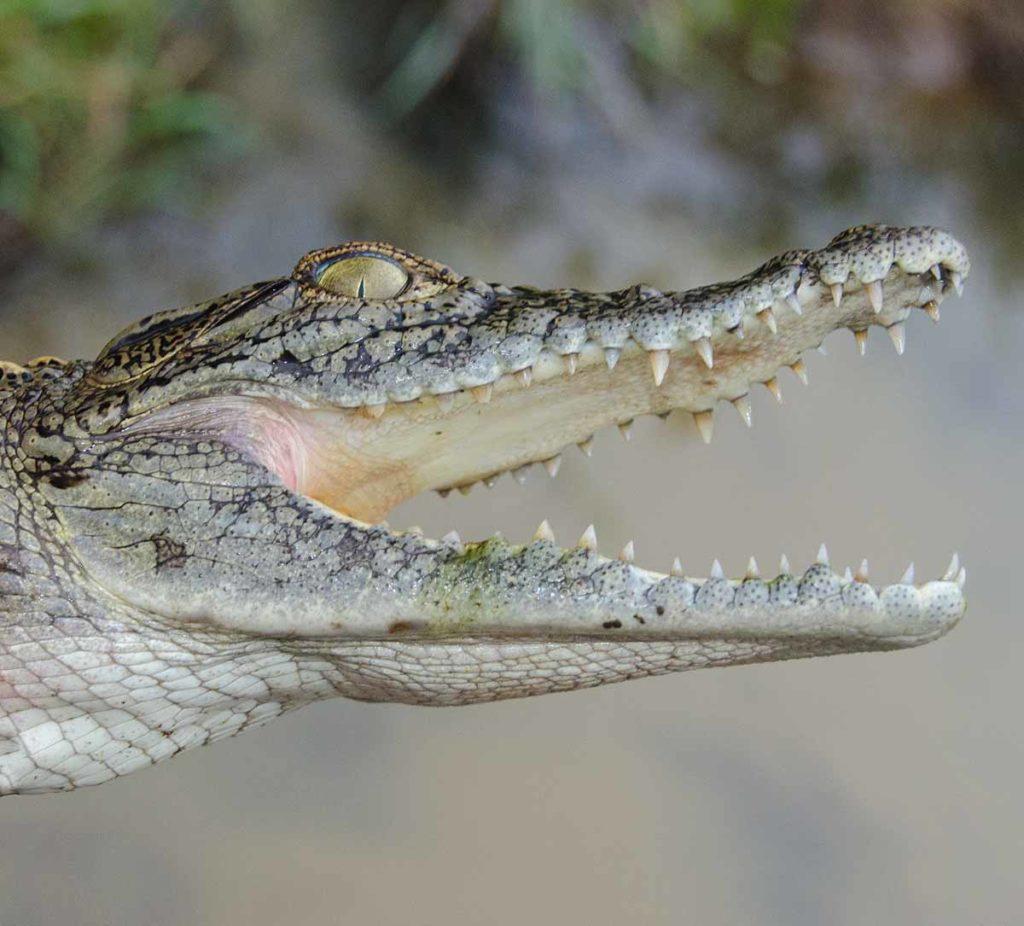 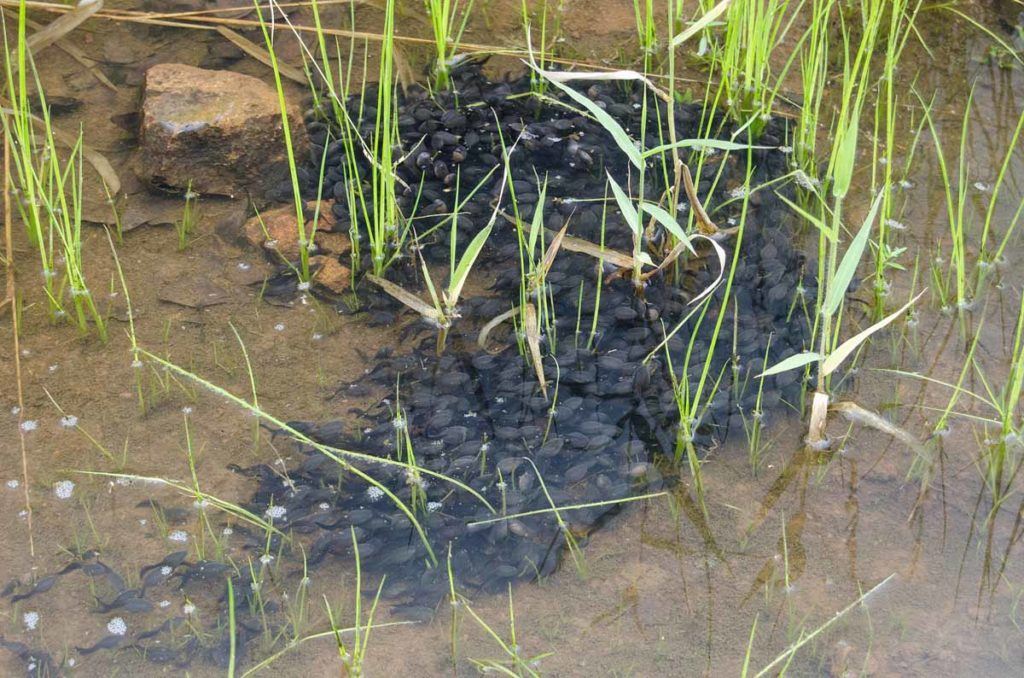 We were concerned that this baby crocodile found in a water-filled furrow on the side of the road had wandered too far from its home dam, but upon closer inspection we noticed these thick black knots of toad tadpoles in the furrow too, and knew that this young snapper would be snacking on these for all its nutritional needs. 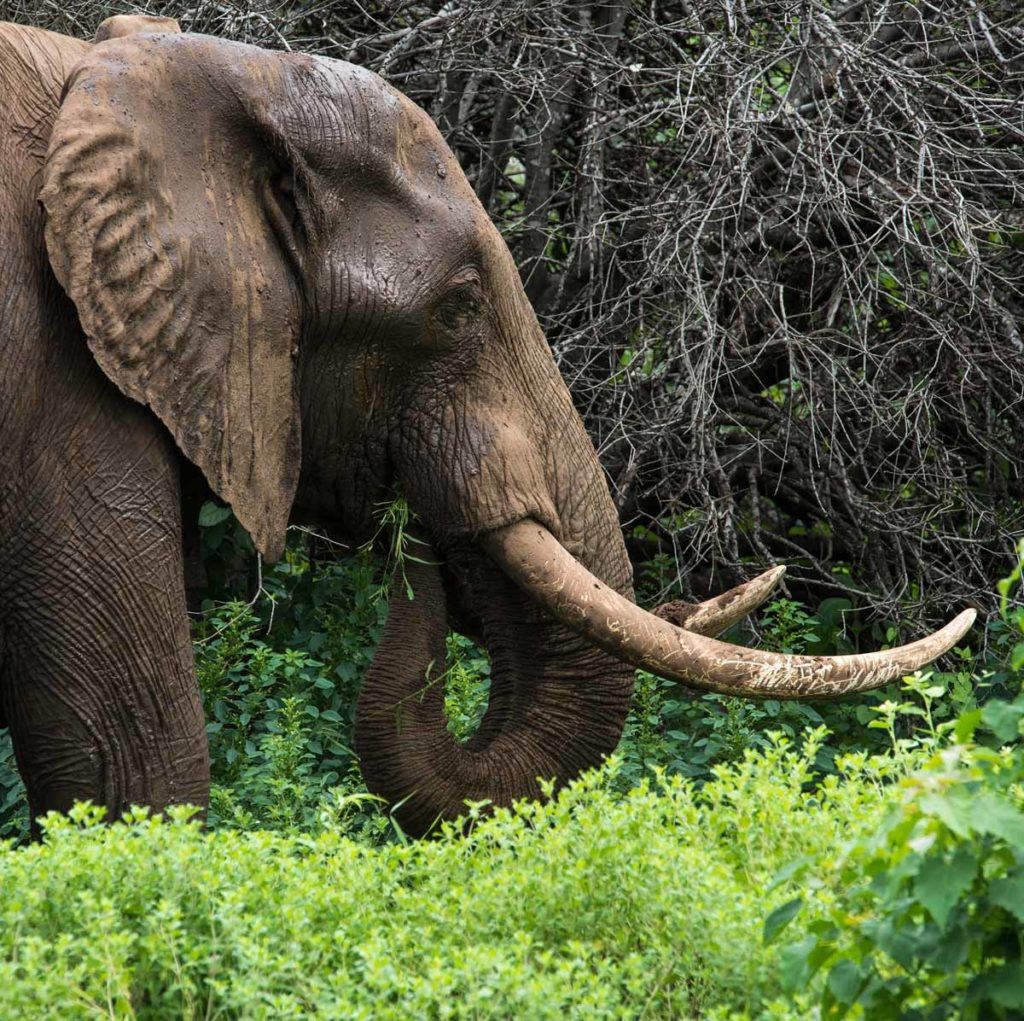 "Gonarezhou" means "Place of Many Elephants" and it is here that you’ll find some of the largest-tusked elephants that remain in the world, like this amazing specimen. You can see a lump on the top of his neck - this is a radio collar. Excellent conservation initiatives are undertaken in the park by organisations that include the Frankfurt Zoological Society and African Wildlife Conservation Fund, and the monitoring of emerging and large tuskers is one of these initiatives. 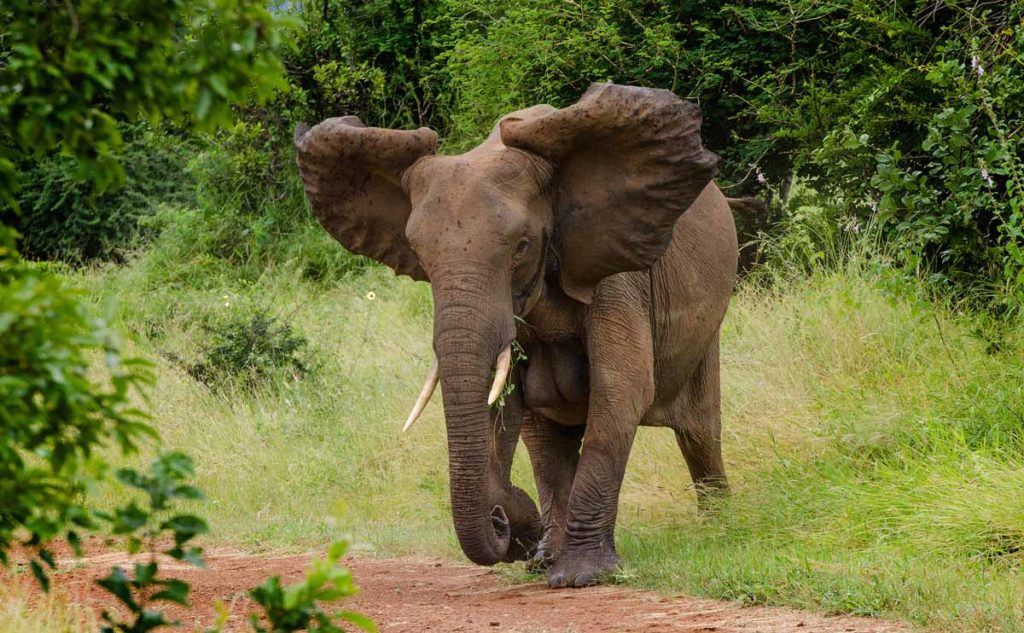 The cow elephant above gave us a clear message that she wanted to be left alone, and when we noticed how full her teats were it became clear she had a very young calf hidden in the bushes behind her. 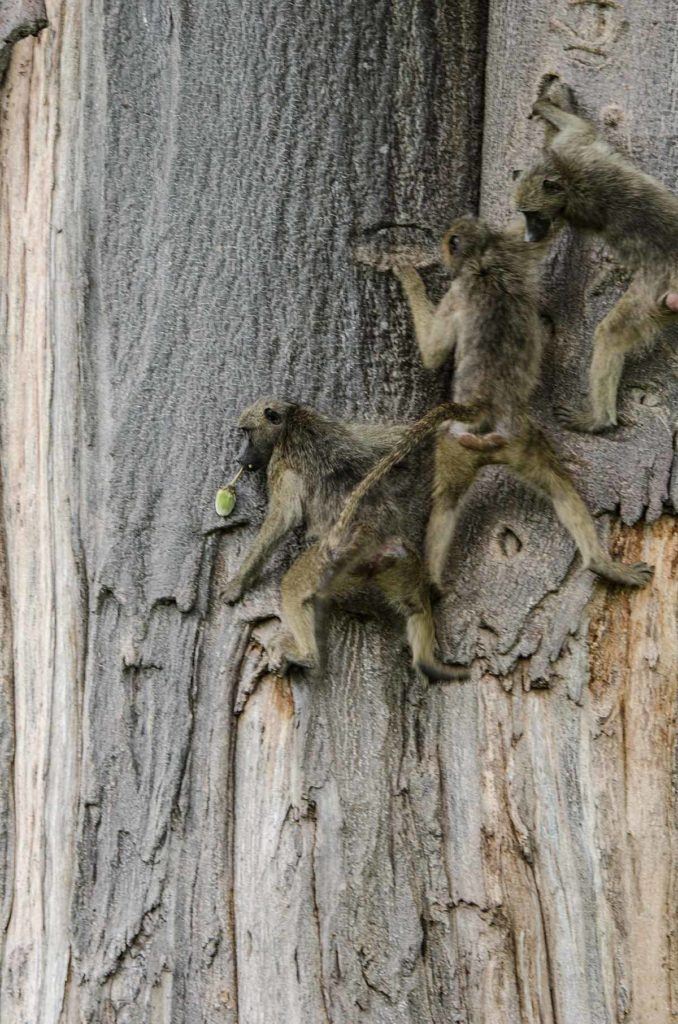 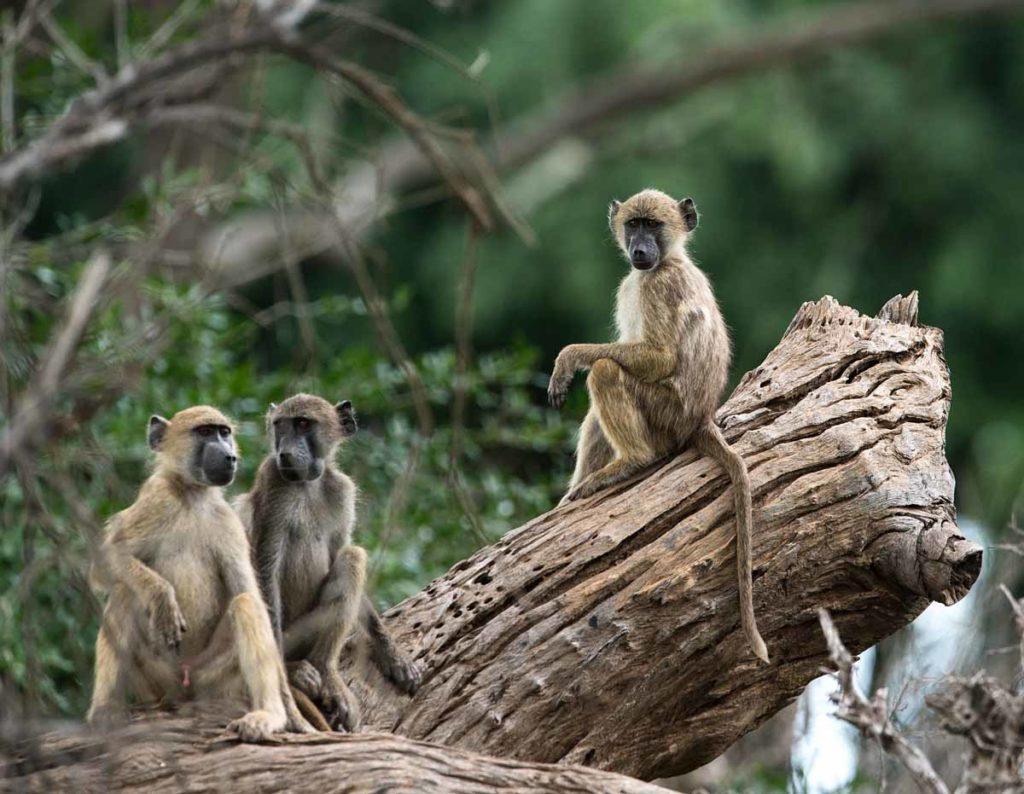 We spotted these baboons raiding a baobab for fruit. They scrambled down the tree using the natural holes and scars of the trunk as hand grips and, when these ran out, took giant leaps of faith into the thick foliage below. Later on, we came across these three baboons that were just hanging out on a dead tree, looking as if butter wouldn’t melt in their mouths. Baboons never disappoint with their behaviour – you just have to laugh at their pranks and mischievousness! 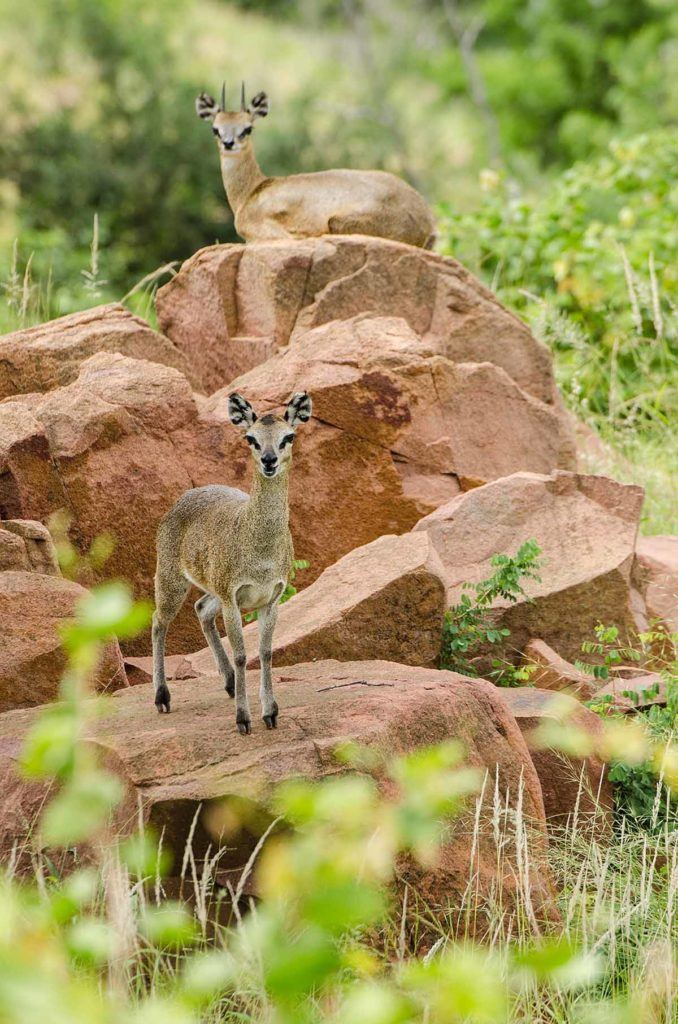 During our exploration of the park we came across these beautiful antelope species. This pair of klipspringers staked their territory from a rocky outcrop. The male was on the highest point, lying down resting but still keeping a good lookout for potential danger, and the female stood poised on her hooves, chewing the cud. The female kudu strolled through a meadow dotted with mauve flowers. The green season is such a beautiful time to visit this area; the skies are dramatic, the animals are well-fed and gathered in herds, the vegetation is lush, bright and especially intense after it’s rained and droplets still cling to the leaves and petals. 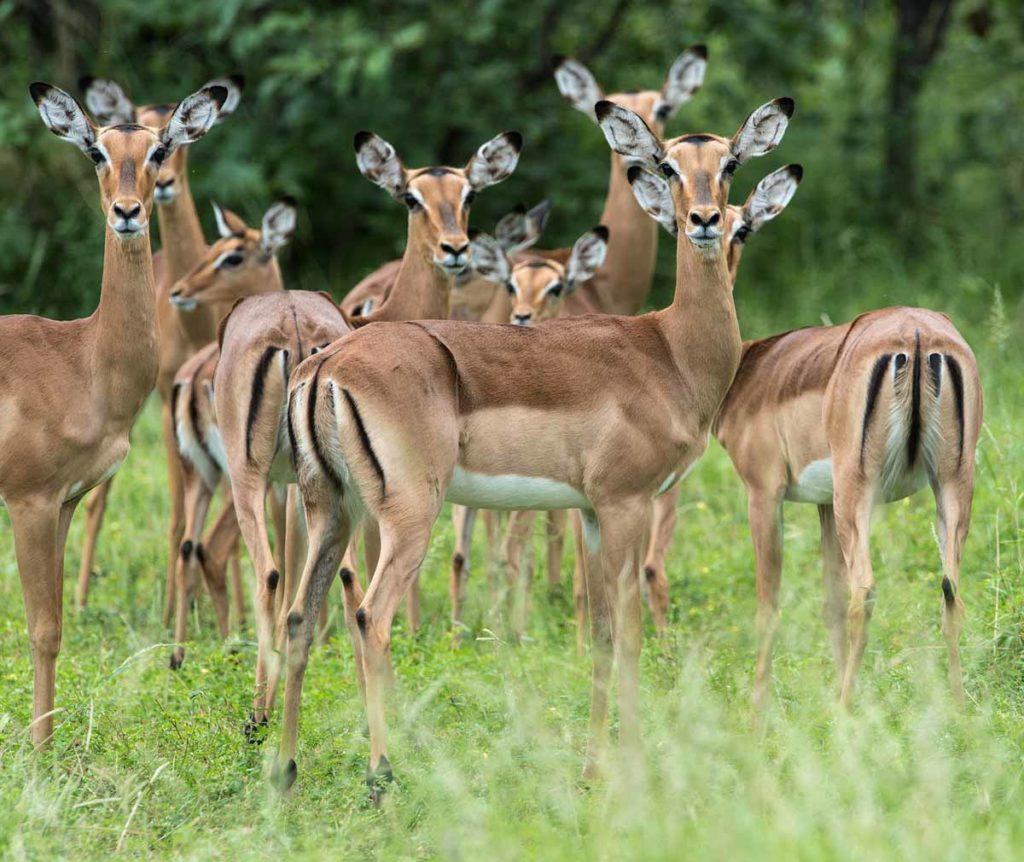 These docile impalas and their lambs stood to attention as we passed, making sure we were no threat. Gonarezhou’s wildlife is not as concentrated or diverse as Malilangwe’s, and it is still wild in every sense of the word. The remoteness and ruggedness of the area means the animals are not used to seeing humans regularly and it’s possible that you may be one of the few people that some of the youngsters have ever seen. 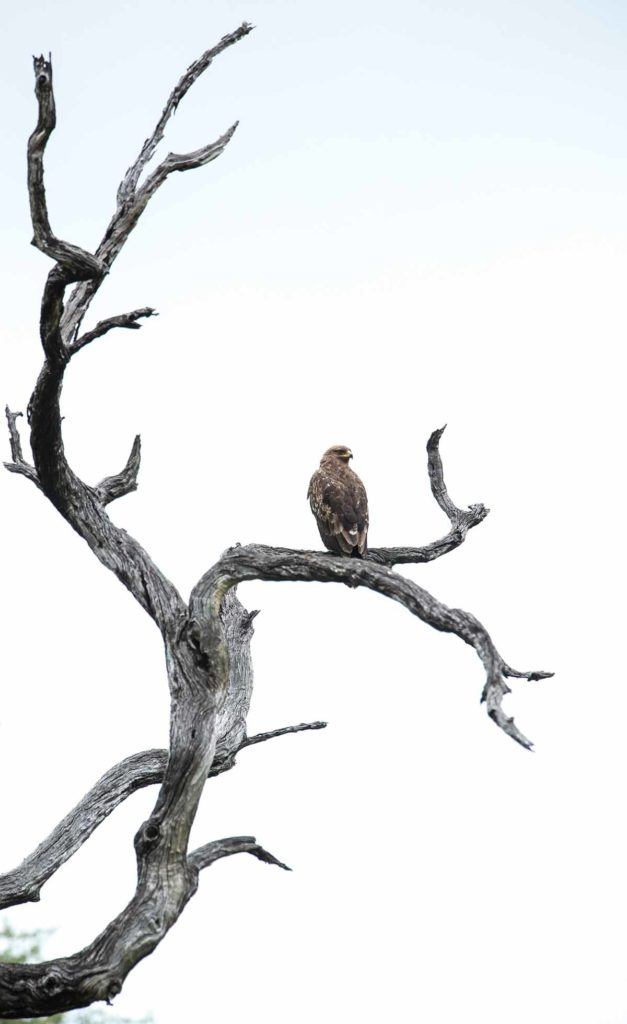 One of the highlights of our day trip was to see a large number of lesser spotted eagles (Aquila pomarina) gathered in one area and perching in the trees. They would have arrived here from their Baltic breeding grounds from mid-October. Their southward flight takes approximately 50 days, while their return migration in March takes twice as long. They follow the rain fronts as these induce termite eruptions, which are their main source of food. 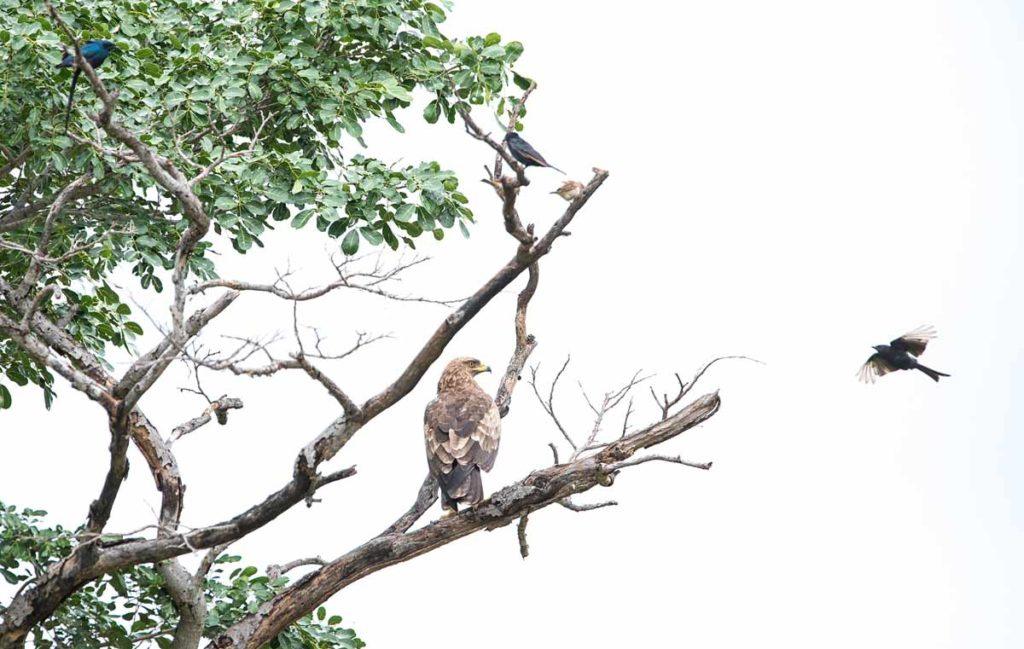 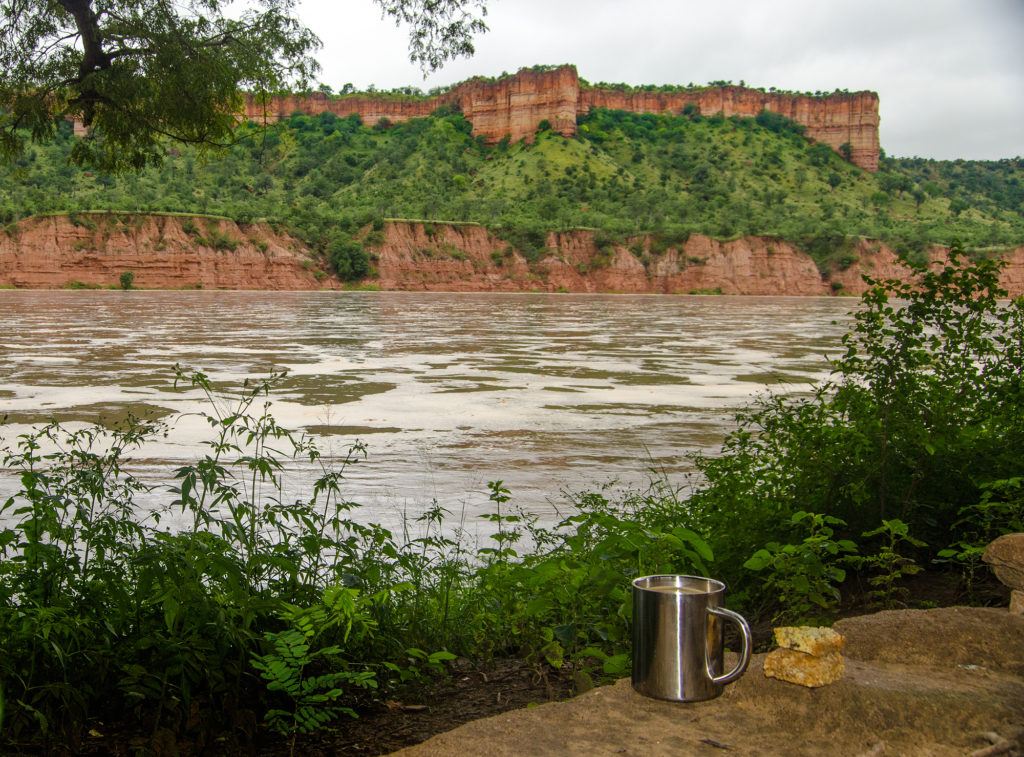 The day trip to Gonarezhou National Park is one of a number of unique experiences on offer at Singita Pamushana Lodge, making it the ideal location for an extended safari. The lodge itself is a showcase of local culture, inspired by the indigenous Shangaan people. The decor features lots of texture, bright patterns and pops of colour, which you can see in this short film that introduces this beautiful property.